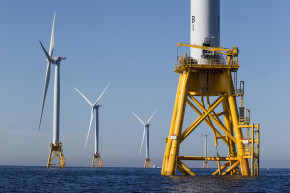 The first offshore wind farm in the United States is now powering an island community off the Rhode Island coast. The five massive turbines that power the Block Island Wind Farm came online Monday, marking the conclusion of more than a decade’s work to move the town to renewable energy. It’s a tiny first step toward tapping the massive potential of offshore wind.

The National Renewable Energy Laboratory has estimated America’s total offshore wind energy capacity is about 4,000 gigawatts, or four times that of the current energy capacity of the United States. That’s a lot of untapped potential, considering the small wind farm now powering Block Island is the only one of its kind in the United States, and its five turbines have a total capacity of 30 megawatts.

That’s only a fraction of its counterparts overseas like the United Kingdom’s London Array, the world’s largest offshore wind farm, which has a capacity of 630 megawatts from its 175 turbines. The United States is generally quite a bit behind northern Europe when it comes to offshore wind, with the Block Island wind farm for now the only one of its kind. However, similar projects are in varying stages of development along the coasts of Long Island, Massachusetts, Maryland, Virginia, New Jersey, and Oregon.

In the meantime, the Block Island wind farm could make a big difference for the 1,000 people who call the small island home. Located 13 miles south of Rhode Island and 14 miles east of the tip of Long Island, Block Island isn’t exactly isolated. But it’s far enough away that it isn’t part of the mainland electrical grid. Not only does that mean the island had previously run on a diesel generator, it also meant the Block Island ferry had to transport nearly a million gallons of fuel every year.

The new wind farm makes the island’s energy properly independent of the mainland for the first time. And, as the town manager pointed out in an interview with the Block Island Times, relying on diesel fuel meant the island’s monthly energy bill fluctuated wildly based on the price of oil, making it hard for the island to budget for long-term civic projects.