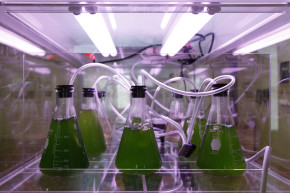 How To Make Art Out Of Fighting Climate Change

An artist's installation turns geoengineering into statement on our vanishing future

As a solution to climate change, geo-engineering — the idea that humans should engineer the planet to absorb more carbon — is one of the most controversial. Even testing technologies that could alter the atmosphere’s balance create heated debate. That’s why an artist, Colin Lyons, thought it was time for some non-scientists to step in.

His new work,called “Contingency Plan,” fuses science and social commentary in a small-scale version of a real geo-engineering concept.

Developed in collaboration with engineers at the University of Iowa, his project is a working prototype that can take debris from an industrial waste site in the city of Cedar Rapids, Iowa, and convert it to iron sulfate. This chemical has been used in a handful of controversial experiments to fertilize the oceans and stimulate blooms of phytoplankton, which can absorb more carbon dioxide.

Whether iron fertilization would actually be effective in reducing global warming remains unclear, but Lyons told Vocativ in an email that he suspects humanity may eventually have no choice but to find out.

“Personally, I hope that geo-engineering never becomes necessary,” he said. “These are largely untested proposals which pose real environmental risks.  However, it seems to me that our current trajectory is likely to make this type of technological intervention necessary at some point in the near future.”

Lyons’ plan would be to set up the installation in 2018 near the banks of the Cedar River. The iron sulfate capsules would remain undisturbed until 2038, at which point there are two possibilities. Either iron fertilization has been proven ineffective or the world has met its goals in reducing carbon emissions, in which case Lyons says they should be left as they are. But if such fertilization does work and we’re still behind schedule in dealing with climate change, then the artwork calls for the capsules to be released into the Cedar River the next time the flooding is high enough to reach them inside the installation.

“It is designed as a kind of time capsule, as well as a catalyst for discussion around these emerging climate engineering technologies,” he said. “Built into this prototype are a series of ‘safeguards’, which enable this project to become intertwined with ongoing discussions regarding emissions targets and reduction efforts, as well as the efficacy and ethics of geo-engineering technologies.”

He designed the work so that only the worst flood in a thousand years would do the job — but such extreme floods have become far more common in recent years, which is thought to be another side effect of climate change.

If such a thousand-year flood happens in the next 20 years, before 2038, then the iron sulfate would get released anyway, proving Lyons’s larger point about our vanishing future in the face of climate change.

“Maybe this is idealistic, but hopefully this will have the effect of encouraging a more active and responsible approach to carbon emissions,” he said.