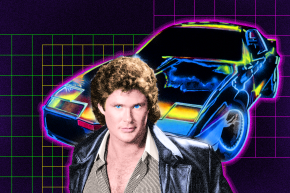 David Hasselhoff Is Hasselbot, A Character Written By A.I.
By Allee Manning

David Hasselhoff Is Hasselbot, A Character Written By A.I.

David Hasselhoff is no stranger to artificial intelligence, which powered his famous character Michael Knight’s car KITT in the cheesy (and beloved) 1980s crime drama “Knight Rider.” Now, he fittingly stars in “It’s No Game,” a short film written partially by an artificially intelligent entity.

Last year, “Sunspring” became the first short film to be written by “a recurrent neural network,” who calls itself Benjamin. It was trained to write using a database comprised of famous sci-fi works like “2001: A Space Odyssey,” “Armageddon,” and all of the “Star Wars” films.

“It’s No Game” is Benjamin’s sequel to the barely-sensical film. This time, the neural network is only used for certain parts of the screenplay. To generate the lines used for Hasselhoff’s character, the Hasselbot, it was trained using lines from “Knight Rider” and “Baywatch.”  The result is a scene that’s inadvertently hilarious, and yet somehow kind of poignant.

The film’s plot, which was created as a commentary on an impending writers’ strike in Hollywood, imagines a world in which screenwriters are being replaced by the same artificial intelligence used to create “Sunspring.” In the future, the movie studio exec explains, humans will be used to feed the machines that entertain them. “People watching people perform human-written drama is a relic,” she says in the film.

Hoffbot is an early iteration of this tech in use. The words spoken by the Hoffbot, who was created by the film studio, are as confusing as he (it?) is confused.

“I wanna be a man,” Hasselbot continues. “I gotta get out of here. I’m gonna make a huge mistake. I need to be with you. Explain it to you. I would like to talk to you and explain this…and tell you a little story.”

In an interview with DW, the real Hasselhoff explains why he chose to accept the role, and what the experience was like. Strangely enough, the actor’s lines ended up being somewhat reflective of his actual experience, something he and the film’s creators aimed to highlight.

“We took what the computer had said, and we put it into my own life, [asking] ‘Who the hell am I? Am I David Hasselhoff? Am I The Hoff? Am I the man who sings ‘Looking for Freedom’? Am I the guy that people think brought down the Berlin Wall? Yeah, who the hell am I?'” he told DW.