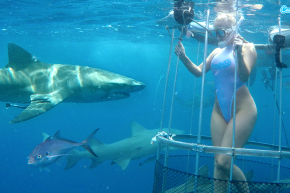 Cam Girl Attacked By Shark While Filming
By Tracy Clark-Flory

Cam site Camsoda wanted to try out some new underwater livestreaming technology, so it decided to put model Molly Cavalli into a shark cage amid heavily chummed waters off the coast of Florida. What could possibly go wrong? Well, she could be attacked by a shark and left with 20 stitches, which is exactly what happened, according to Camsoda.

“We were testing new technology, so why not do it with a beautiful girl, live sharks, chum the water,” said vice president Darren Press in an interview with Vocativ. “We’re told it’s safe, we think it’s safe.” But, he added, “It took a turn for the worse, and that’s regrettable.”

Camsoda has edited a video of the alleged incident, using footage captured by handheld cameras outside of the shark cage, as well as by a GoPro inside the cage using the custom mobile hardware they wanted to test. Cavalli, clad in a revealing white swimsuit branded with the Camsoda logo, is shown donning a snorkel and flippers and climbing into the cage. The Camsoda team was already recording and about to begin livestreaming when things went south.

The boat’s crew had heavily chummed the waters, according to Cavalli, and the sharks were “going crazy” and repeatedly bumping into her producer, who was outside of the cage. Just as she started to panic, she says she was bit — either because the shark or her foot had slipped through the bars of the cage. Before getting in the water, Cavalli says she had noticed that the bars on the cage were widely spaced. “I wasn’t really comfortable with that,” she said. “But we put a lot into making sure this day happened, and I wasn’t going to back out at that point.”

Footage from the GoPro shows Cavalli suddenly recoil and reach toward her foot as blood clouds the water. But the alleged bite itself was not captured on camera.

The video then shows Cavalli surfacing above the water with a gasp, as a crew member asks, “Is she alright?” She screams and cries as she’s pulled out of the water, blood dripping from her ankle and onto the boat deck. Someone exclaims “Fuck!” as the wound is rinsed and the extent of the gash is revealed. The camera provides a closeup amid her sobs.

Cavalli says she was rushed to the hospital, where she received 20 stitches — and Camsoda will be covering her medical costs, according to Press.

There is plenty about this story that seems, well, fishy. First, the bite is not shown in Camsoda’s video, despite the presence of multiple underwater cameras. Press, who insists the attack was real, says the cameras weren’t focused on her feet. “Molly’s got some amazing attributes, and her feet are awesome, but that’s not the number one thing you’re going to film,” he said. “We weren’t planning on her getting bit, either.” Second, Camsoda has not attempted to conceal what should be an embarrassing case of an employee being seriously harmed on the job. Instead, the site has actively promoted the incident by editing together the aforementioned video and publishing a blog post all about it.

Press admits that “it was our fault planning it and maybe a little risky,” but he adds, “accidents happen.” There’s a chance, though, that they will do it again. “Next time we do something like this,” he said, “we’ll be a lot more cautious.”