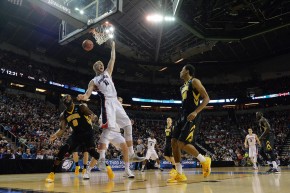 Seattle seemed to be setting itself up pretty well in its quest to renovate KeyArena and create a home for a possible NBA or NHL expansion team. With two groups submitting competing bids, it seemed as if the city would be able to wrangle a package that would inflict the least harm upon the public. Remember, the city made it clear after hedge fund billionaire Chris Hansen’s plan to erect a brand new arena, subsidized by $200 million in bonds and other freebies, was rejected by the Seattle City Council, that a wholly privately-funded package was their endgame. Seattle appears to have fallen short of that goal.

In the Seattle Post-Intelligencer on Thursday, a local scribe — or at least a headline writer who never read the actual article — set out to examine the merits of the two proposals from the Oak View Group and Seattle Partners. We begin with the assertion that Mayor Ed Murray is going to okay one of the two, “barring a major political shakeup.” Then there’s a five-point bulleted recap of why the Hansen plan collapsed, a mention that the public will be given the opportunity to voice its opinion(s) at a hearing hosted by the Seattle Office of Economic Expansion on May 11 and… that’s it.

An embedded, 39-second-long video tells the reader that KeyArena is 55 years old, the city hopes to attract more concerts and other events, and states that the Oak View Group’s proposed bid estimates the total cost at $546 million. That’s the entire “breakdown,” as the headline alleges.

Luckily, the fine folks at Sonics Rising, an SB Nation blog dedicated to a team that left town close to a decade ago, took a deep dive into the proposals. And while this should surprise absolutely no one at this point, both contain requests for public money, though it’s far less of a colossal boondoggle than the Raiders’ new Las Vegas home.

It took quite a bit of digging too, since, according to Sonics Rising, “The financial information section of the [Oak View Group’s] proposal was redacted from public consumption.” Again, this is our shocked face. But in one of the Oak View Group’s trade magazines, they discovered this:

OVG seeks to negotiate a deal with the city to repurpose some of the tax revenue collected each year on admissions, retail sales, parking, and the leasehold excise taxes they would pay in lieu of property taxes for use of a private building on public lands. The plan calls for these revenues to provide credit towards the base rent they would pay the city each year. Any excess would be used to create a “City Arena Fund” that would help to offset OVG’s costs for maintenance on the arena.

Though OVG will handle all construction costs and overruns, the city would be responsible for the effort and cost to remove any hazardous waste or materials found on the defined redevelopment site during construction.

What percentage of tax revenue will be shuffled around and how much credit will be extended? That remains an unknown, but as Field of Schemes noted, the above requests are not dissimilar from parts of Chris Hansen’s old proposal, which would have totaled approximately $90 million.

As for Seattle Partners, their proposal comes in at only $521 million, but they’re requesting $250 million in municipal bonds, with a five dollar “facility fee” assessed to arena attendees to pay Seattle back over the duration of the proposed 35-year lease. And yes, they want a tax break or two thrown in:

Both bidders want to retain the naming rights to the arena, which, if history is any guide, can be worth millions. For example, the University of New Mexico, hardly what you’d consider a college sports powerhouse, received $10 million from a window installation company on Wednesday in exchange for slapping the name “DreamHouse Arena” and “DreamHouse Stadium” on its venues.

And so, the Great American Stadium Swindle continues apace. The proposals can be read in their entirety here.