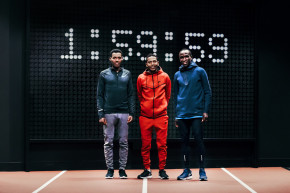 Three elite runners, with new kicks and plenty of outside help, take aim at a new limit

Humans are obsessed with breaking records — and tend to invest particular meaning in records with round or even numbers. A 100-meter dash in less than ten seconds, a mile in under four minutes, or a 26.2-mile marathon in no more than two hours.

The latter is the ambitious goal of two major sporting goods conglomerates, Nike and Adidas, who are launching commercially-available running shoes inspired by the bespoke footwear their elite marathoners will wear while trying to run a marathon in less than two hours flat. The world record is actually 2:02:57, but breaking that threshold doesn’t sell shoes or allow Nike to describe its new product with such lofty ideals as an “innovation moonshot designed to unlock human potential.”

Nike is taking the first shot at the mark on Saturday morning at 5:45 a.m. local time in Italy. If that sounds like an odd start time and location, it’s because Nike is attempting to control every variable it can to put its three handpicked marathoners in the best position to succeed.

The rationale behind the time and location is all about the course and climate. The marathon will take place at the Autodromo Nazionale Monza—known as the “Temple of Speed,” —which is a flat Formula One track with a 2.4-kilometer loop (about 1.49 miles) in a region with regular low temperatures around 54 degrees, just a few ticks above the ideal for distance running. Nike designated a three-day window for the event and picked that time for the most favorable forecast.

There is so much help, in fact — there will be a slew of pace-setters and even motorcycles toting refreshments for the runners — that the international track and field body won’t sanction this an official world record, should it be accomplished. That’s not necessarily the point, however, as Nike has said this endeavor “challenges the perception of what is possible in sport, resets the expectations of product and enables Nike to gather incredible athlete insight.”

Of course, careful parsing of that sentence shows Nike’s true intention, which Guardian writer Sean Ingle aptly labels “one-third science experiment, two‑thirds PR masterstroke and shoe advert for Nike.” The shoes in question are called the Zoom Vaporfly Elite and will be sold as the Zoom Vaporfly 4% for their purported four percent more efficient carbon-fiber sole plate; reducing the marathon world record to under 2 hours, by the way, requires a 2.4-percent reduction in time.

Of the three world-class marathoners — Eliud Kipchoge, Lelisa Desisa, and Zersenay Tadese — the experts have anointed 2016 Olympics gold medal winner Kipchoge as the only one with even a fractional chance of success. He also won last year’s London marathon in 2:03:05, just eight seconds off the standing record. While Matt Nurse, a biomechanics Ph.D. and vice‑president of the Nike Sport Research Lab, told the Guardian he believes the stunt has odds “much higher” than his original 30 percent guess, he is nearly alone in offering a double-digit number, while others are using decimal places to register their guesses.

Running expert John Kellogg told LetsRun.com that, “unless he’s got a huge mechanical advantage — unless he’s got cheater’s shoes — and I don’t know anything about those shoes — then he’s not doing it.” (Track’s governing body hasn’t weighed in on the shoes’ legality, but Nike has divulged considerable detail.) That jibes with Tucker’s assessment that, in the unlikely event of a sub-two-hour race, the order of importance for the controlled variables would be “the shoes, followed by the drafting, then the hydration, weather and course, in that order.”

Magness, also the author of Science of Running, blew the whistle on the Nike Oregon Project, accusing its boss, Alberto Salazar, of cheating on doping rules (which Salazar denied). Magness told LetsRun.com, “When you’re pushing boundaries, the one thing that works is drugs. That’s the one way that we know we can accelerate performance gains.

“If the first person to break 2:00 is then popped for drugs, that just further hurts our sport. Athletes are already willing to risk a lot and take drugs just to win random marathon majors. I imagine the incentive is probably 50-fold for going down in history as first sub-2:00 marathoner because that essentially makes your career for life.”

Each of the runners is tested regularly under the rules of the international track body and the World Anti-Doping Agency. None of the three has ever failed a test or been accused of cheating.

While the underlying motivation for this venture is commercial — the immediate sale of these new shoes and the data-collection effort that will propel future R&D — Nike must be cognizant of how such events effect the sport.

“I think it’s good for short-term interest and provokes intriguing discussion — philosophical, technological, and physiological,” David Epstein, author of The Sports Gene: Inside the Science of Extraordinary Athletic Performance and of the ProPublica report in which Magness accused Salazar, told Runner’s World. “Long-term, chasing times is an endeavor of diminishing returns, and I think the sport ultimately lives or dies based on racing and rivalries. So if these curated-conditions attempts make normal races feel slow and less interesting, I think, long-term, that’s a potential negative.”

For now, the runners are chasing numbers: a roughly 4:34 pace for 26.2 miles to crack 2:00:00, a brazen target for a human’s achievement, a sport’s popularity, and a company’s bottom line.