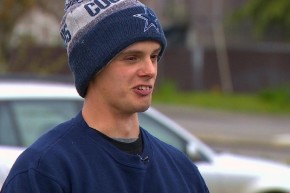 Austin Crawford can count his blessings. The 22-year-old recently thwarted a co-worker from tossing him headfirst into a running wood chipper near Salem, Oregon. The alleged incident, reminiscent of a famous scene from the film “Fargo,” drew international headlines and landed Crawford’s accused attacker, Scott Iverson, behind bars with an attempted murder charge. But how is the young survivor, who reportedly suffered only a stiff neck and cut to the jaw, holding up?

Vocativ reached out to Crawford to find out and did not hear back. But we also happened to come across Crawford’s Facebook page, where he appears to have documented the ordeal and some of its aftermath. Readers may find some perspective, along with a few pearls of wisdom, contained within these vivid — and, at times, lyrical and inventive — posts. They may also find the outlines of the hero so many of us need right now.

And here you thought your Thursday sucked.

Luckily, cops collared the suspect — albeit three hours after he attempted to turn Crawford into a pile of pulp.

Though we’re not quite sure what “caramactic” means, the rest of Crawford’s message is crystal clear: Keep kicking ass, fight like hell.