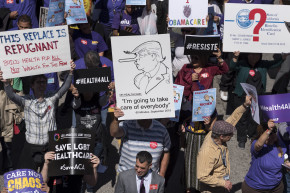 This Thursday afternoon, the U.S. House of Representatives successfully passed their version of the revamped American Health Care Act, the much beleaguered and constantly changing legislation intended to supplant the Affordable Care Act.

Amid heavy criticism by Democrats and activists as well as non-committal trepidation by some fellow Republicans, the newer version of the bill was nevertheless rushed to the House floor by its supporters, seemingly to avoid the bad publicity from another damning analysis by the Congressional Budget Office.

The CBO found that the previous iteration of the bill, which failed to garner enough guaranteed votes from House Republicans, would lead to over 20 million Americans losing their insurance by 2020 and dramatically raise premiums for select swaths of the population, such as those a few years shy of obtaining their social security benefits.

How much, if any, the new version differs in how it will affect Americans’ overall ability to afford health care is a hanging question, but an independent report by health consulting firm Avalere details how at least one group of Americans will be left in the dust — those with chronic, pre-existing health conditions who previously were covered by the ACA.

The AHCA dictates that states can obtain waivers that allow insurance companies to treat some Americans with pre-existing conditions differently in deciding how much their insurance plans should cost. Those who have their individual coverage lapse for more than 63 days and try to apply again will then likely face much higher insurance costs the second time around. To help lighten those costs, the AHCA provides $23 billion in direct funding to be used in “high-risk pools” over the next nine years as well as up to $100 billion in its Patient and State Stability Fund.

Avalere’s analysis, however, found that this funding would fall dramatically short of covering these people’s insurance needs.

Measured against the 2.2 million Americans with preexisting conditions who have insurance plans on the individual market, they found the available money for high-risk pools would only help cover 100,000 people in 2019, less than 95 percent of those who could previously afford their insurance. Even assuming that states would use all of the remaining $15 billion allocated via the Patient and State Stability Fund — unlikely since it can be used elsewhere — the AHCA would still help only cover 600,000 Americans with pre-existing conditions in 2019, they found.

A similar analysis by the left-leaning Center for American Progress, which also looked at people on small-group insurance plans, found that more than 800,000 Americans with pre-existing conditions could see themselves unable to afford coverage, even with the new revisions that allocated more money to be used for high risk pools.

Avalere’s numbers are conservative, according to the firm, so it’s possible that even more chronically sick Americans could lose out. By the same token, though, the analysis assumes that every state will attempt to obtain waivers, which may not be true in typically blue states like New York and California.

Regardless, given the architects of the AHCA have deliberately tried to paper over the potential risks of the bill, it seems these numbers are the best indicators so far of how harmful it may be.

With the House’s successful passing of the AHCA, the Senate now will deliberate over their own version of the bill. Should both versions pass, the consolidated legislation will be sent to President Donald Trump to be signed into law.