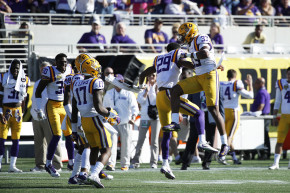 LSU Tells Athletes Not To Wear School Gear At Protests

Jamal Adams of the LSU Tigers at the Buffalo Wild Wings Citrus Bowl — Getty Images
By Robert Silverman
May 04, 2017 at 1:23 PM ET

The Baton Rouge Advocate got its hands on a copy of an email sent by Mirian Segar, Louisiana State University’s senior associate athletic director, to all the university’s student-athletes, telling them in easily-decoded language to tamp down on publicly protesting the announcement by the U.S. Justice Department that no charges would be filed against the police officers who killed Alton Sterling in 2016. Or if they do chose to protest, they probably should do everything in their power to hide the fact that they’re an LSU athlete.

The email was sent on Wednesday afternoon, according to the Advocate, and SB Nation, which also obtained the email, is further reporting that the entire athletics association staff received a similarly-worded version. Segar’s email begins by offering undefined “support,” mentioning that counselors are available for any athletes that require further attention, and reaffirming that LSU respects the right of free expression. That respect is then quickly called into question.

If you choose to express your opinions publicly, please remember the following:

As student-athletes, you are some of LSU’s most visible ambassadors. Many of you enjoy a large following and with that comes responsibility. Remember that what you say and do directly impacts how people around the world view LSU.

IMPORTANT: If you choose to express your opinion on this issue, including on social media, we ask that you do not wear LSU gear or use LSU branding.

So LSU’s logos and images of its athletes in branded gear, which are used by the university on its website when soliciting donations, are fine as long as the university remains in total control of of those images and uses them to profit as it sees fit. Got it. Social media is added to the list of spaces LSU wants to remain extremely safe, partially as a result of then-star LSU running back Leonard Fournette’s 2016 tweeted tribute to Sterling. Any other implied and/or outright restrictions you’d like to put on the speech of your unpaid labor, LSU?

Show respect for your teammates and your coaches with what you say. Understand they may have different views than your own and many have personal connections and feelings about this case. Lean on and support each other as a team.

Teammates and coaches who have a different stance on state-sanctioned violence are perfectly free to express that opinion. This is how an ostensibly free, democratic society functions. Sometimes, people disagree!

We expect this to be a very sensitive situation with heavy scrutiny from both local and national media. Remember that public comments on this topic may be their first and only impression of you.

That’s just dandy. Making it clear that speaking one’s mind might maybe, possibly damage a player’s future pro prospects is a wonderful implied threat. And all of this runs in direct opposition to public statements from NCAA officials, including President Mark Emmert.

“Student-athletes are also saying we’re part of the student body and we want to have a voice in social justice issues,” Emmert said in 2016 at the NCAA’s annual convention. “We want to be part of that conversation. And I applaud that. I know sometimes it causes stress and some strain, but it’s exactly what we want our student-athletes to do as members of our campus community.”

This sounds exactly like the kind of stressful situation Emmert was talking about! It’s a sentiment that was echoed during this year’s convention by Kevin Rome, the President of Lincoln University, who said, “Whether by wearing black armbands or kneeling during the national anthem, student athletes should not lose their constitutional rights.”

As Inside Higher Ed noted, though, some coaches haven’t stuck to the stated policy over the last year and a half, with one comparing one quarterback that wore a “Fuck Trump” hat to noted draft bust Johnny Manziel, and another who told anthem protesters that they “need to move to another country.” Add LSU to the list.