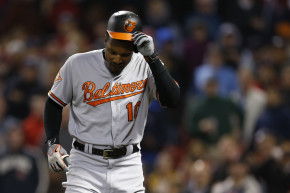 Sports Leagues Are Struggling To Police Racism
By Joe Lemire

The day before the awful racist incident at Fenway Park, in which slurs and peanuts were hurled at African-American Orioles centerfielder Adam Jones, an Italian soccer match was marred by its own terrible racial episode.

The fans there subjected Ghanaian native Sulley Muntari to monkey chants and, despite the player’s pleas to the referee for intervention — the official has the authority to stop the game and address the crowd — nothing was done. Worse yet, the referee penalized Muntari a yellow card for arguing his case. Worse still, when Muntari left the field in protest, he was given a second yellow card, which prompted an ejection and one-game suspension. Worst of all, a post-match review by Italian soccer officials upheld the ban. In effect, Muntari was penalized because of his race.

As Piara Powar, executive director of the anti-discrimination Fare Network, told the Associated Press, there is a “failure of the regulatory processes” in dealing with racism in sport. “It’s endemic across Europe at the moment,” Powar said.

America, too. While there are obvious breakdowns in the execution of these policies, international soccer at least has statutes on the books, granting European leagues the power to close problematic sections of stadiums or even the whole venue. FIFA can sanction clubs by deducting standings points or even relegating them to a lower-caliber league for repeated serious infractions. The association can also suspend players engaging in racial abuse for five games, while the European body doubled the ban on offending players to 10.

A similar model has been suggested as an option for Major League Baseball as the league is reviewing all 30 teams’ practices in handling such incidents, the Associated Press reported. On the other hand, FIFA disbanded its anti-racism task force last year, claiming the group had “completely fulfilled its temporary mission” — because, allegedly, racism was temporary and is now obsolete. Russia, which is hosting the 2018 World Cup, has at time been in denial about its issues. The idea of holding home teams accountable for the actions of their fans is good but the devil is in its enforcement.

Several African-American baseball players spoke out about the regular abuse they face around the league. Many cited the fact that certain cities are typically worse than others — Yankees pitcher CC Sabathia said, “When you go to Boston, expect it” — but the issue is not unique to one ballpark.

“Has It happened to me before? Yes. Yes, it’s happened to probably the majority of black players in the game,” Red Sox outfielder Chris Young, who has played for five teams, told reporters. “It’s not just Boston, it’s society.”

The Red Sox rushed to apologize to Jones, and their fans gave him a standing ovation the following day. Team president Sam Kennedy suggested lifetime bans for fans engaging in racial abuse, a policy implemented for the first time on Tuesday when a middle-aged white man used a slur to describe a Kenyan woman’s rendition of the anthem. The man used the epithet in the presence of a six-year-old black boy and was promptly booted and banned. Boston Police Department’s civil rights division has reportedly followed up on the incident as well.

Such strong actions are necessary and overdue — and only a starting point — and Jones’ agent told Fox Sports’ Ken Rosenthal that he will campaign for a full zero tolerance policy across the sport.

But while these policies are a start, ballpark security will ultimately have trouble policing entire stadiums, meaning fan vigilance and a cultural shift have to be the end goal, as far-off and idealistic as that sounds.

“This is a cancer that is running rampant through our community,” Tanisha Sullivan, president of the Boston branch of the NAACP, told the Boston Globe, “and we collectively have to work together to root it out.”