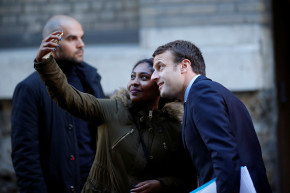 Entrepreneurs Want Macron To Bring France Into The 21st Century

Start-up founders believe in Macron's globally minded approach to economic reform, but are up against a society that still views capitalism as taboo

The French have compared the glossy, volunteer-based presidential bid of the pro-EU, centrist Emmanuel Macron to an American-style campaign.

In an unusually high-octane debate on Wednesday, Macron called his far-right opponent Marine Le Pen “the priestess of fear.” Macron’s campaign hired Liegey Muller Pons, the same Paris-based campaign technology start-up that helped Barack Obama get elected in 2008. Only three days before the first round of voting last month, the campaign tweeted a video of a chummy phone conversation of the former president wishing Macron luck in the election.

Let’s keep defending our progressive values. Thank you for this discussion @BarackObama. pic.twitter.com/8rhNdHkLo8

But Jeremy Fain, a 34-year-old co-founder of a Paris-based startup, says Macron’s campaign is uniquely French in that it’s challenging the country’s fiercely entrenched taboos around making, and discussing, money.

“We still have a problem with money in France,” said Fain, whose company Verteego develops AI technology software, and is participating in a burgeoning trend of independent startups seeking to innovate and disrupt France’s traditional markets.

“If you come to have so much money, it’s assumed that you’ve stolen it, so independent businesspeople were always looked on with suspicion,” said Fain. “Once experimenting, and failing, could destroy your career, but that’s been slowly changing.”

Up against Le Pen, a vocal supporter of Donald Trump who’s promised voters a return to the France of the 1950s, Macron is advocating to bring the country into the 21st century. He backs laws that would foster the “Uberization ” of the languishing French economy, which has a painful 10 percent unemployment rate, more than double that of Germany.

Fain says that such severe stagnation was made possible by the outdated over-regulations created during the period of industrialization when the “patron,” or factory boss, was rightly assumed to be prone to abusing workers.

But Fain, whose mother is from Morocco, says that in the modern, global economy, the interests of employers and employees are more closely aligned, and that his company values a workforce with diverse backgrounds, languages and skills.

“The foreign engineers that we hire love French values, we need more people like that,” he said, adding that Le Pen’s plans to “Frexit” the EU and discourage international trade would be catastrophic for the country’s small and big business alike.

“We see the EU and the global market as the solution, not the threat,” he said.

Jeremie Brabet-Adonajlo, who founded his 3-D printing startup Pzartech in Tel Aviv, is one of the thousands of French expats who have launched their businesses in more tech-friendly cities around the globe.

“The French culture is built around hierarchy, and not a lot of eye level between workers and bosses,” said Brabet-Adonajlo.

Brabet-Adonajlo in a meeting for young French entrepreneurs with Macron at Tel Aviv University. Credit: Facebook

Macron’s mission to cut France’s notorious bureaucratic red tape and unleash an entrepreneurial revolution faces steep hurdles in a country that continues to pass highly protective labor laws. Last January, legislation came into effect that gives workers “the right to disconnect” from email after work hours, to “ensure the respect of rest time and vacation, as well as personal and family life,” the government said. It adds to the 35-hour-workweek, generous vacation time, retirement packages, and a range of other pro-employee regulations that make it difficult for employers to hire or fire. Startup owners have argued for years that such rigid protections are tragically out of touch with a country in need of mobilizing its workforce.

“The French know that startups creating jobs. They are asking politicians to take measures that are already applied in countries other than France,” Christophe Bavière, CEO of Idinvest Partners, said in an article in Le Figaro.

France’s commitment to the “right to leisure” has made Macron’s years-long campaign for a leaner government and higher flexibility in once state-owned industries highly controversial. Last year, while serving as finance minister under the unpopular President Francois Hollande, Macron sparked a violent taxi drivers’ riot when he said that Uber drivers working 70-hour weeks had more “dignity” than the unemployed.

“For many young people it’s easier to find a client than a job,” said Macron, who has praised the company for hiring thousands of French citizens of immigrant backgrounds in the blighted French suburbs, where years and millions of dollars have done little to help the problems of social isolation and inferior access to education, housing and the job market. There, unemployment remains around 20 percent, double the national average, and there’s been a growth in support for radical Islamic groups in those areas. They’ve disproportionally produced fighters who go join the ranks of ISIS in Syria or Iraq along with ISIS sympathizers who carried out attacks on French soil, like Karim Cheurfi, who killed a policeman on the Champs Elysees boulevard last month.

“Those who live … where social and economic difficulties or migration are concentrated do not receive the same chances as elsewhere to succeed,” said Macron in a March visit to the Paris suburb of Les Mureaux, where he urged young people to build their own businesses rather than aspire to become athletes.

Despite its reputation for hostility to innovation, French startups have been growing steadily for years, raking in 960 million euros ($1.08 billion) in 2015, up from 862 million euros in 2014, according to data from Tech.eu, a technology publication and research body. BlaBlaCar, the French version of Uber, scored an investment of $200 million last year.

Many in the tech community say that Macron’s position as the frontrunner, with support from neither the traditional Republican right nor the Socialist Left, already signifies that France is moving away from the state-controlled cradle-to-grave work culture.

But the 39-year-old novice faces a daunting urban-rural divide. In the first round of voting last month, Macron dominated in large and dynamic cities like Paris, where only five percent of Parisians cast their ballot for Marine Le Pen. Some 35 percent of Parisians voted for Macron, and an overwhelming majority is expected to do the same in the second round of voting on Sunday.

Le Pen has dominated France’s rust belt and rural areas. In Hénin-Beaumont, one of many formerly leftist areas today known as the “forgotten France,” Le Pen has swept the vote by promising former steel workers and other impoverished whites salvation by way of closing borders, “Frexiting” the EU and clamping down on immigration and Islamic terrorism.

An Arcelor Mittal steel worker dressed in protective work suit demonstrates against the French labour law proposal in Marseille, France, as part of a nationwide labor reform protests and strikes in 2016.

Paradoxically, the towns which have been least affected by immigration are those who most fervently support the anti-immigration Le Pen. Her National Front party, which was built on anti-Semitic and racist roots, has masterfully enhanced the perceived threat of foreigners in the same ways as the advocates for the election of Trump in the United States and the Brexit referendum in the United Kingdom.

Macron insists that that opening up the economy, by way of, not in opposition to, the EU, will allow the economy to finally move forward.

“On Sunday, together, for our youth, we will demonstrate our confidence to rebuild, without which nothing is possible,” Macron said during his final rally on Thursday in Albi, in southern France.

Macronistes are hoping that “optimism” for a better economy, a better relationship with the EU, and a better program for upholding the Republic’s liberal values will win out in the end.

“The time of national dejection, which has lasted so long, is over. It was necessary so that the page would turn and a new time of optimism would open up,” said centrist politician Francois Bayrou in an interview with Le Figaro.

But no matter how persuasive Macron’s platform may be, many in France fear that voter abstention could reach a record 28 percent, which could pave the way to victory for Le Pen.

“Macron’s labor reforms are great, there’s no question about it, but we are dealing with the danger of Marine Le Pen, who is very smart and not saying out loud the things that would turn off some of the voters,” said Jeremy Fain, the entrepreneur from Paris. “We cannot be too confident one year after Brexit happened, and after Donald Trump was elected, which no one thought would happen.”