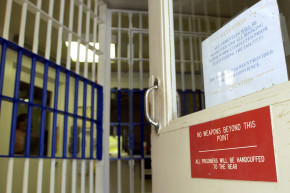 U.S. Jails More Citizens Than Any Other Country — Often For Life
By Sara Morrison

U.S. Jails More Citizens Than Any Other Country — Often For Life

A new report shows that America is increasingly determined to put violent offenders away for the rest of the lives.

America jails far more of its citizens than any nation in the world. And more of those prisoners are serving life sentences, according to a new report.

The Sentencing Project, a research and advocacy group for criminal justice reform, found that life sentences are at an “all-time high,” with 161,957 prisoners serving life sentences as of 2016, according to a report released Wednesday. Another 44,331 people serving so-called “virtual life” sentences of at least 50 years, making it likely they will die in jail if they serve their full terms. All told, one out of seven prisoners is serving what is effectively a life sentence.

According to the report, no one puts as many people in jail for life, whether it’s by volume or rate, as the United States, which houses one-third of world’s inmates. The rate of people serving life sentences in the U.S. — 50 per 100,000 people — is roughly the same as the entire incarceration rate of some countries, such as Sweden and Denmark. Even though many states have actually decreased their prison populations and the crime rate has decreased across the U.S. the Sentencing Project found that the number of people serving life sentences in America has quadrupled since 1984

Of particular concern was the 11,745 prisoners who were sentenced as juveniles and 1 in 17 people serving life or virtual life sentences. They do, however, have the possibility of parole after a 2012 Supreme Court decision said that life without parole sentences for juveniles were unconstitutional.

Though the report features anecdotes about prisoners serving life terms for nonviolent drug offenses, the vast majority of lifers are in there because they committed a violent crime. Almost 59 percent of the people who are serving life sentences committed murder or, what the report describes, “other death.” According to the report, only 1 in 12 received life or virtual life sentences for a nonviolent crime, reflecting a general public attitude that these types of crimes should not receive such severe punishment, especially as prisons become more crowded.

The Sentencing Project report’s definition of a life sentence includes sentences that have the possibility of parole. In fact, the report’s researchers found that twice as many prisoners are serving life with the possibility of parole compared to those who are serving their sentence without it. But since 2003, life-without-parole sentences have increased by 59 percent increase, far outpacing the 17.8 percent increase in life-with-parole sentences during that same time.

The report recommends eliminating life-without-parole sentences entirely and reducing sentences to end the virtual life terms. In addition to giving offenders a second chance, the elimination of life-without-parole sentences would be good for the taxpayers who are no longer on the hook for the $1 million that the report estimates such sentences cost per prisoner. But that’ll be a hard sell to Americans and a U.S. justice system that favors punishment over rehabilitation.