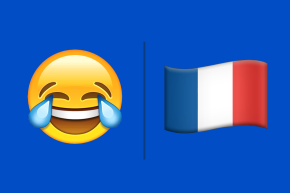 The rightward arrow, the megaphone and the French flag were among the most frequently used by supporters of the far-right candidate

Ahead of France’s most dramatic presidential elections in modern history, supporters of the far-right candidate Marine Le Pen are doing what they do best: mobilizing their base through social media.

French voters called for people to to get out to vote and get Le Pen into power, using the rightward arrow, the megaphone, and the French flag emojis, as found by a Vocativ analysis of hundreds of thousands of posts on social media.

Sunday’s runoff elections, between the anti-EU Le Pen and the centrist frontrunner Emmanuel Macron, are being viewed throughout the world as a test of populism in the era of the Donald Trump presidency in the United States and the Brexit referendum in the United Kingdom.

The most recent polls have shown Macron to be in the lead by a comfortable 20 points, but his campaign was targeted in a massive hack just mere minutes before the candidates finished their public campaigning. The French media were asked to refrain from reporting on the thousands of documents, and it is unclear if they will have any affect on the outcome of Sunday’s vote.

On Twitter and other social media, though, Le Pen’s supporters are fiercely optimistic that the National Front, France’s top political movement for young people, will be victorious on Sunday night. Her social media fans have been consistently and aggressively campaigning online, using hashtags and emojis, which market research firms say help drive greater engagement.

Polls predict that Macron will win the presidency by a 60-40 majority.

But thousands of Le Pen voters refuse to believe in what they call the “left-wing media.” Instead, they are tweeting accusations of Macron’s banking ties and alleged corruption, mockingly using the tears of joy and thumbs down emojis, according to a Vocativ analysis of social media reactions, using the R statistical computing language.

Caption: A Twitter user going by Gutenberg mocks a tweet praising the determination of Macron, following the Wednesday debate. “Onwards (the name of Macron’s political movement) toward a five-year scam.”