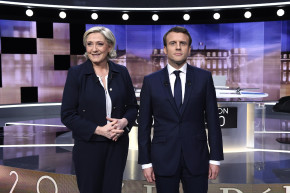 In a familiar tactic, a group of trolls are frantically propagating unproven stories about France's Emmanuel Macron

Fake news and questionable, politically motivated leaks were a staple of the U.S. presidential election campaign — and now they’re popping up in France.

On the eve of the final round of the French presidential elections, local authorities have opened an investigation into an attempt to spread allegations against the front runner, Emmanuel Macron. The centrist candidate, who faces the ultra-right Marine Le Pen on Sunday, also filed a lawsuit over the rumors that were spread online, claiming he had evaded taxes in France using a haven in the Caribbean.

Like similar stories from the U.S. election, this tale includes 4chan, Reddit, fringe media sites, some of the same relentless “alt-right” Twitter accounts that pushed conspiracy theories against Hillary Clinton during 2016, and many more anonymous ones.

It all started just before the two candidates faced each other in the final debate on Wednesday night, when unverified reports that Macron had evaded paying taxes started cropping up online. A so-called ‘dossier’ claimed Macron had opened a shell company on the Caribbean island of Nevis that had relations with banks implicated in tax evasion practices. The “documents” were first uploaded to the infamous message board 4chan/pol/. The user who submitted them claimed to have sent the documents to “hundreds of French journalists” who declined to publish them before he dumped them online.

Other users commenting on the thread were of mixed opinions as to the authenticity of the documents, but were nearly all certain that their spread would damage Macron politically.

From there, the story quickly spread to Twitter, Reddit and far-right media outlets. One of the first “alternative media” sites to publish the documents was Disobedient Media, which has also posted fake news reports about German chancellor Angela Merkel and various conspiracy theories in the past. That same story was then published on Zero Hedge, a finance news blog which was described by Bloomberg news as a cheerleader for Presidents Vladimir Putin and Donald Trump. “Alt-right” and pro-Trump Twitter accounts got on board from there, propagating the message in French and English.

Macron was quick to deny the allegations after they surfaced, and the bank whose logo appeared on the files that were uploaded to 4chan also confirmed it was forged. French authorities opened an investigation into who was trying to libel the front runner, with just days to go.

But online, the effort to make the allegations stick continues, seemingly led from outside France. Various Twitter accounts are trying to push the story using the hashtag #MacronGate — and by Friday afternoon, c8 hours after the fake documents first appeared, the hashtag has been used in more than 50,000 tweets and re-tweets.

The main account in this effort appears to belong to Jack Posobiec, who worked for an organization called “Citizens For Trump” in 2016, and is now affiliated with the Canadian alt-right media outlet, Rebel Media. In less than 48 hours he tweeted the hashtag more than 30 times, blaming Twitter for ignore the “trend”.

The size of the circles reflects the importance in the network, the colors reflect different groups of users that are linked to each other. Analysis based on tweets and re-tweets with the hashtag #Macrongate which were collected between May 3, 2017 - May 5, 2017.

#MacronGate is the Biggest Story in the World but Twitter is Censoring! https://t.co/lX6JK1QNPk

Posobiec and other Twitter users who are busy with #Macrongate are many of the same users who spread Hillary Clinton conspiracy theories such as that her campaign is linked to a Satanic cult, or that she was plotting to murder Monica Lewinsky.

So far it seems that the relentless efforts made by foreigners will not be enough to push Le Pen over the edge. Two days before the vote, Macron is way ahead of his opponent in the polls — and unlike in the U.S., the French pollsters have been proven right so far in this election season.

And yet, it wasn’t so long ago that a bunch of Americans were writing confidently that their centrist candidate had a healthy polling lead and stood no chance of losing to a controversial, right-wing populist.