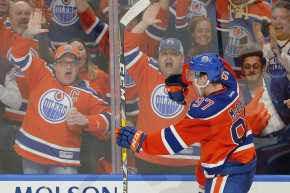 Edmonton Oilers Are Fine With Screwing Over Female Fans

Women will have to wait to use the bathroom, because men

The Edmonton Oilers’ front office was faced with an serious conundrum heading into Game Three of their Western Conference semifinal matchup against the Anaheim Ducks: some men had complained about the scourge that is an extended wait to use the bathroom

It’s unclear how many men had complained, or in what manner they’d voiced said complaint, but the general manager of Rogers Place, the Oilers’ home arena, was on it, according to Global News. They changed a bunch of restrooms from women’s to men’s and as a result, women were standing in line for up to a half an hour.

Reached for comment, the general manager of Rogers Place has a fascinating explanation as to what prompted this decision. Via Global News:

“For playoffs, what we’re seeing is we’re getting predominantly men in here – the more exciting the hockey gets, I think the less guys are willing to give up their tickets,” said Susan Darrington, general manager of Rogers Place. “So we’ve adjusted our plans and we flipped a restroom on our main and on our upper concourse to be more available for men.”

Let’s break down the Oilers’ thinking here, because it’s really something. There are more men in the stands during playoffs, according to Darrington. It would be nice to know how they concluded that the only way women get tickets during the regular season is by men doling them out, but Darrington doesn’t explain that, nor does she unpack how Rogers Place came to this conclusion, save for the mention of a survey of current season-ticket holders. No actual data, methodology, or anything concrete is provided that could back up her assertion that attendance habits have changed during the grand total of four home games they’ve played so far. (A small sample size if ever there was one.)

The only way this could look worse is if Darrington straight up admits she’s fine with negatively impacting a gender that sports teams have historically treated in a patronizing and belittling way. Oh wait.

“You’ll never make everyone happy. I think we actually feel good about what we’ve done. The men are getting through faster, the women are seeing a little more of a delay.”

Ouch. Thing is, there is a certain amount of anecdotal evidence does exist that the Oilers have had trouble getting guys in and out of the john this postseason. But as the National Post reported, the reason is twofold: one, they’ve roped off a percentage of the facilities to serve the needs of rich dudes and corporations that can afford luxury boxes, and two, a logistical change from the previous Oilers arena resulted in long, single queues which then spun off into multiple toilets, as opposed to an individual line set aside for each bathroom.

So if someone’s got their head buried in their phone or is otherwise occupied, he can gum up the entire works. The Oilers have tried to solve this by stationing attendants to keep the traffic moving and clock how long fans are waiting, but as one an unnamed fan bluntly put it, “The issue with the men’s washrooms in Rogers Place is that other men are too dumb to figure it out.”

What’s even more fun, in 2007 when the Oilers were making the case that Edmonton should float what now has amounted to 600 million Canadian dollars to pay for the new arena, they cited the long waits to use the head and buy food at various concession stands in the old venue. The “human dams,” as then-Oilers President Patrick LaForge called them.