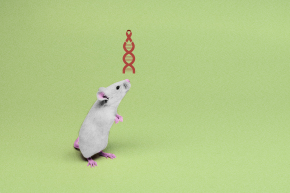 Gene Editing Used To Wipe Out HIV In Infected Mice

There is a crystal clear roadblock in our fight to rid the world of HIV and AIDS.

Our current line of antiretroviral drugs are great at scrubbing clean almost every trace of the virus — though many in the developing world don’t have resources to access them. That not only allows people living with HIV to have long, healthy lives, but lowers their risk of spreading it further to effectively nil. The minute someone stops taking them, however, the remnants of the virus emerge from their hiding spot and once again devastate the person’s immune system.

Researchers for years have been trying to find ways to wipe out these last virus reservoirs and accomplish a full cure, with so far encouraging but still unfulfilled promise. According to a recent study published in Molecular Therapy, one potential tool may come in the form of the emerging gene-editing technology, CRISPR.

Building on earlier research, scientists used CRISPR to target HIV in three different groups of mice. Some of the mice were bred so their cells naturally contained HIV genes; others were given an altered version of HIV that could infect mice, and the last were given a transplant of “humanized” immune cells infected with HIV. Across the board, CRISPR was able to find the virus hiding in various organs and tissues, then slice its genetic structure into ribbons, leading to lower levels of the virus in the mice.

“Over our years of research, all of this was frankly a big surprise,” Kamel Khalili, one of the team’s senior researchers and director of Temple University’s center for neurovirology, told CBS News. “I never thought that this CRISPR system was going to be working out so beautifully with such efficiency and precision when it first came onto the scene.”

In the simplest terms, CRISPR is a sort of missile-guidance system that allows scientists to precisely change or “edit” a strand of DNA at a given location. Its promise is that it can be used to repair damaging genes or entice beneficial mutations in any living cell, whether it’s in a human, mouse, or an HIV virus.

In this study, the researchers used the method to slice away multiple parts of the virus’ genome at once, making it harder for it to survive the assault.

As with all things in mice research, it’s important to keep expectations modest. For every promising finding in mice that pans out, there’s a countless number of dead ends. The team next hopes to use their method to target HIV in lab primates, which would be a much more relevant test of CRISPR’s potential to someday fight HIV in people.

Elsewhere, as Vocativ has reported, researchers have theorized that CRISPR could be used in a different way against HIV — to find the mutations in people that make us impervious to infection. That then could lead to a gene treatment that would eliminate the virus in HIV-positive people as well as preemptively protect others at risk.