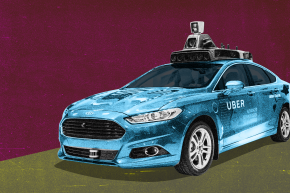 Who Is Winning The Driverless Car Race?
By Alejandro Alba

Who Is Winning The Driverless Car Race?

In California alone, there are 29 companies that have received test permits. Here's a guide to keeping track

For better or for worse, driverless cars are now a reality and being tested to hit the roads within the next five years, and a dizzying array of companies are jumping in to compete in this new market.

Technology giants have mostly been circling the auto industry to pair up with existing car brands and provide software that’ll make cars truly autonomous. Companies such as Alphabet, Apple, Uber and Tesla have already built their prototypes, and recently, Samsung said it was entering the race. Car manufacturers, such as Mercedes-Benz, Nissan, and Audi, are also independently developing software and “hardware” (i.e. cars themselves).

Forecasters and experts predict self-driving cars won’t become available to the masses until 2020, at the earliest. Yet, some, like Tesla, are pushing for even earlier. For those lost in the self-driving hype —in California alone, there are 29 companies that have received test permits — below is a round-up of progress that gives a sense of how soon you may expect to give up the wheel to a robot.

Samsung received regulatory approval on Monday from South Korea’s Ministry of Land, Infrastructure and Transport to test driverless cars in its home market. The approval will allow Samsung to test its technology using Hyundai Motor’s vehicles. It’s still unclear where the technology will be tested.

Samsung’s road tests with Hyundai will help the company develop its autonomous car platform that it wants to sell to automakers — since the company itself wont be going into car manufacturing. Samsung already started working with automotive supplier Harman International Industries, which it bought in March for $8 billion. As for Hyundai, it’s vehicles have been reported to be equipped with sensors that can recognize road conditions and obstacles.

Although it seems that Samsung already has the technology needed to start testing its cars, it’s pretty late in the game. Other companies have been experimenting with the technology and testing prototypes for years now.

As the most valuable tech company on the planet, Apple needs to find another field to conquer and that could be the world of autos. The tech giant was granted an official test permit in April to hit the road with its autonomous driving technology, which will be used in three 2015 Lexus RX 450h vehicles.

Apple has been secretive with its self-driving car project — internally referred to as Project Titan — and has declined to comment on receiving a permit or on any automotive plans. However, there have been multiple reports and sources familiar with the subject that confirm Apple’s involvement with autonomous driving. The only commented Apple has made on the subject, was to the National Highway Transportation Safety Administration saying, “The company is investing heavily in the study of machine learning and automation, and is excited about the potential of automated systems in many areas, including transportation.”

While Apple may want to keep the project under wraps, often details eventually leak. If Apple is rolling out a new service, it definitely has the money to do so and a team of former NASA engineers and Tesla robotics experts to execute the project.

Waymo, Alphabet’s unit in control of Google’s self-driving cars, is one of the first companies that started experimenting with autonomous driving. The company developed self-driving technology for the Toyota Prius back in 2009. Since, it’s made big strides in advancing tech to recognize pedestrians, cyclists, and other obstacles, all while still being able to “read” stop signs.

Ahead of the game, Waymo has already begun to offer free rides to Phoenix, Arizona residents in order to get proper feedback and build confidence in their technology. Waymo plans to test its technology with 600 self-driving Pacificas, a big increase from the 100 cars it started with.

Waymo is slowly getting closer to establishing a service for consumers. It also hasn’t reported any crashes or accidents — other than the bus collision it had at two miles per hour — according to California’s Department of Motor Vehicles’s annual autonomous vehicle disengagement report. One major issue is the legal battle with Uber. Waymo sued Uber a few months ago claiming its technology was stolen by a former Google employee and used it in Uber’s Otto self-driving trucks.

The ride-share company has been in a rollercoaster of bad PR, even when it comes to its self-driving car initiative. Uber had been testing both its driverless cars and trucks on public roads — which means that it’s ahead of the game — but it seems to have slowed down operations ever since one of its self-driving cars was involved in an accident in Arizona. No serious injuries were reported.

Operations have also been grounded in certain areas due to Uber’s legal battle with Waymo and it being accused of stealing and using patented technology. Then there’s the issue of losing its employees. Recode reported that about 19 of Uber’s engineers have left the self driving division of the company. Uber will be set back even more if the judge hearing the Waymo case rules against Uber.

Uber’s end goal with self-driving cars may be to establish a ride-sharing service that doesn’t require drivers. Then the company doesn’t have to give any gig economy workers a cut at all.

Right next to Google, Tesla is one of the companies that’s been successful with its self-driving cars. CEO Elon Musk has been ambitious in setting goals, even promising to demonstrate the first autonomous road trip from Los Angeles to New York City by the end of this year.

Tesla is also performing well with the success rate of its road tests. It’s had no collisions or major accidents, according to California’s Department of Motor Vehicles. It’s had several disengagement incidents, but mostly caused by road conditions or technical problems. However, it’s important to note that California’s DMV does not account any incidents the company might’ve had in other states or private test tracks, and the company does not release such information.

While Tesla is still testing some of its autonomous features, the company has already decided to send software updates that enable autopilot to all car models with Tesla’s second-generation hardware. New cars being made at the factory will also be shipping with the appropriate hardware and software that enables full self-driving.

Luxury brands like Mercedes-Benz, Cadillac, Jaguar, and Audi, and mainstream brands like Ford, Toyota, and Nissan, have all been making strides with their technology, but none are ready to roll it out to consumers yet.

Mercedes-Benz has been testing driverless cars in public roads since 2014, but it has no plans to bring its driverless car to the market, yet.  Nissan has also been testing its autonomous driving technology on the all-electric Leaf since 2013, but it’s not ready to commercialize it at its current stage. All the auto makers previously mentioned planned to have their first fully autonomous car between 2019 and 2022.