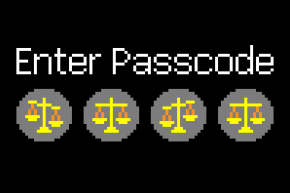 Does the Constitution protect your iPhone unlock code?

A Florida extortion case centering around the threatened leak of sexually-explicit photos could have future implications for the confusing question of whether police can force crime suspects to hand over passwords to their phones.

Julieanna Goddard, who goes by “YesJulz” on her social media accounts and has amassed enough online fame to garner a New York Times magazine profile last year, first pressed charges against Hencha Voigt and Wesley Victor last July. She claims she was extorted by the pair, who are also personalities on social media, when they allegedly threatened to leak sexually explicit photos of her.

As per the police report, the accused duo had sent Goddard a text demanding $18,000 within 24 hours, or else they would leak her photos and videos. They were arrested that day, and four phones were collected as evidence. The two have pled not guilty to charges of extortion, conspiracy to commit extortion, and unlawful use of a communication device.

Since then, the prosecution has sought to gain access to Voigt and Victor’s phones by forcing them to turn over their passwords to search for evidence.

“They’re asking for the passcode so they can keep on searching what’s on the phone — which may be incriminating my client — and then use that against her,” Voigt’s attorney told CNN.

The answer to whether or not revealing phone passwords are tantamount to self-incriminating testimony protected by the Fifth Amendment falls in a grey area. Some experts believe it’s only a matter of time before this issue is taken to the Supreme Court.

In the past, some lower courts have ruled that it is unconstitutional, saying that forcing someone to give up this information requires them to “communicate knowledge,” thus violating the law. However, other courts have contradicted this ruling. One in particular also occurred in Florida and centered around a defendant who believed the suspect had explicit photos of her on his phone without her consent. The basis for this is the “forgone conclusion” doctrine, which makes an exception of the amendment’s modern interpretation in a situation in which the court believes the evidence at hand exists, is in possession of the subject (in this case, on a device), and is authentic.

Additionally, judges have ruled that forcing suspects to use other biometric means, such as the finger scan, to unlock their phones for law enforcement is perfectly acceptable.

The judge assigned to this case is expected to make a ruling on whether or not Voigt and Victor must give up their passwords on Wednesday.