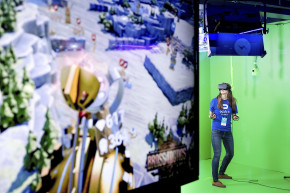 Is Facebook Taking Its First Steps Into VR Surveillance?
By Janus Kopfstein

Is Facebook Taking Its First Steps Into VR Surveillance?

With new 'Spaces' app, privacy advocates warn it could one day offer a wealth of new data to advertisers

Ever since it bought Oculus in 2014, Facebook has made it clear that it had big plans for virtual reality.

But with the release of Spaces, Facebook’s new social app for the Oculus Rift VR headset, privacy advocates are warning that it could be inching closer to introducing invasive new ways to track and profile users’ behavior. That’s because in VR, much more than on your smartphone, both a person’s physical body movements and emotional reactions become far more accessible as data.

Their warnings come in light of recently leaked documents claiming that Facebook helped advertisers target emotionally-vulnerable users by analyzing the emotional content of their posts — including teenagers who feel “insecure” and “worthless.” Facebook disputes that characterization, saying it does not offer tools to target people based on their emotional state. But in the past, it has also faced outrage over a related issue: its infamous “emotional contagion” experiment, in which researchers manipulated users’ news feeds by adding positive or negative posts to test their reaction.

“With more traditional interfaces and methods, the best Facebook can hope for is to attempt to digitize what’s happening in tangible space,” Aral Balkan, an independent software developer and privacy advocate, told Vocativ. “It does this by buying data from data brokers, tracking your behavior across the web, and, of course, by watching your every move when you’re using its apps or are on its web sites.”

But those methods of tracking users don’t compare to what data-mining companies like Facebook could do with VR, which allows the collection of far more intimate forms of data, like head movements.

Advertisers see VR as the next big platform, and many have already expressed a keen interest in profiling and tracking consumers by collecting the physiological data gathered by the sensors in VR headsets. Several companies offer software that generates “heat maps” of every place users look while in VR by tracking their head movements. And more recently, HTC, makers of the Vive VR headset, revealed it had developed technology capable of tracking users’ eyes in VR to check if they’re watching ads.

This data can help VR developers improve and personalize their apps and games. But it can also turn consumer VR into a kind of laboratory testing platform, allowing companies to analyze user behavior and learn to predict or even manipulate their future actions.

“Virtual Reality, for a people-farmer like Facebook, is the ultimate behavioral analysis lab,” said Balkan. “It can control every factor, from the lighting to every sound you hear and gauge and analyze your responses.”

It might be hard to get that sense from Facebook Spaces, a quirky new app for the Oculus Rift VR headset released in March at the company’s developers conference. Spaces lets up to four Facebook users chat and play in VR, each embodying a cartoon avatar lookalike that moves and changes facial expressions in real-time by reading its owner’s physical gestures and listening to their tone of voice.

Right now, Oculus’s privacy policy explicitly allows Facebook to collect data about a user’s “physical movements and dimensions” for various purposes, including to “customize your experience based on your online activities” and “market to you.”

When contacted by Vocativ, a Facebook spokesperson said the company is not collecting data about Spaces users’ physical movements or voice “at this time.”

“We do not currently collect data on emotions expressed by gestures or voice,” the spokesperson told Vocativ in an email. “We do collect information about the emotions people explicitly use their avatars to express (for example, using the button/joystick movements on the controller to make your avatar smile).”

More Mark Zuckerberg Wants To Change How We See Our Surroundings

Threats to privacy in VR have been long anticipated by academics like Fiachra O’Brolcháin, a research fellow at Dublin City University’s Institute of Ethics. The same year Facebook acquired Oculus for $2 billion, he co-authored a paper describing how social media platforms could one day merge with immersive game-like environments like Second Life or World of Warcraft, allowing their owners to more effectively track and profile users.

Assuming VR catches on and becomes widely-accessible, the paper’s authors wrote, embodying a digital avatar could become a widespread form of online interaction along the same lines as phone calls and video chat. And just like before, most users probably won’t realize what kind of privacy invasions they’re opting-into.

“People acting in real-time in virtual spaces are unlikely to be aware of the amount of data they are generating,” O’Brolcháin told Vocativ. “Much data will be generated regarding people’s behaviors in virtual spaces — how they respond to stimuli, how they interact with others, etc. This will provide Facebook with more detailed information on its users.”

Even if it’s not doing so right now, collecting that information is firmly within the interests of Facebook’s business model, and O’Brolcháin believes the company is edging closer to the reality of social VR he and his colleagues described. Facebook itself has said Spaces only represents “one percent” of its ambitions for VR.

“Within virtual worlds, it will be possible to use colors, sounds and shapes to subtly change people’s perceptions of what they are experiencing,” said O’Brolcháin. “It will be more likely to measure precise causal links between people’s experiences in these worlds and their behavior beyond, but it is likely that Facebook will gain more power to manipulate people’s off-line behavior.”

Balkan said that, considering that Facebook’s entire business model is harvesting as much data as possible from users, it wouldn’t make sense for the company to not take advantage of this data in some way. “At this point only the most naïve among us still harbor any illusions that Facebook will not exploit anything and everything it knows about you in every way possible,” he said. “So should you be scared that they have VR and AR in their sights? Yes, you should.”