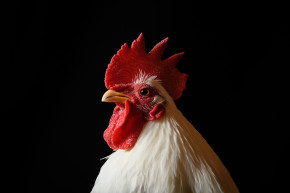 Now we know why wings feel like a religious experience

The chicken as you know it may be thanks to Jesus.

Humans first began domesticating chickens about 6,000 years ago, but new genetic research suggests these animals didn’t truly take shape as we know them today until more recently. It was only 1,000 years ago that the genes of Europe’s most popular poultry began shifting to make the birds lay eggs faster and be more comfortable around humans — and changes in Christian dietary rules could have been the major driver of the change.

As detailed in in the journal Molecular Biology and Evolution, this research reveals how very specific humans historical events can have a huge — and immediate — effect on the evolution of other species, particularly those we have domesticated for food.

In tracking down the specific variations in genes that distinguish chickens from their wild cousins, the researchers found two particular genes in the domesticated poultry that show signs of strong selection. This means humans bred chickens in order to maximize the traits that those genes are linked with, even if this was still centuries before humans gained actual knowledge of genetics.

The researchers used statistical modeling based on the available information on ancient chicken DNA. They found this gene selection, along with a huge increase in the chicken population throughout Europe, began during the 10th century. That result fits with the history of eating in that period, as new Christian dietary rules introduced by Benedictine monks around the year 1,000 forbade people from eating any four-legged animals during fasting periods. Chickens and their eggs were the perfect loophole, making chickens were suddenly a far more appealing menu item.

It’s likely that there were other factors at play here, including shifting climate and improved agricultural practices. The 10th century is also around when Europe goes through one of its first periods of urbanization, and the increase in city-dwellers means more people would be looking to keep relatively compact livestock like chickens instead of bigger creatures like cows that need more land.

Chickens’ suddenly increased importance in human diets could have led people to breed them to lay more eggs, be less aggressive, and less fearful of humans — all of which are traits controlled by a particular variant of a gene known as the thyroid-stimulating hormone receptor, or TSHR. And the big jump in the chicken population means that variant of TSHR wouldn’t just be favored, it would have a chance to dominate the entire chicken population. Those fasting rules are long gone, but their effect could well still be felt to this day in a whole other species.