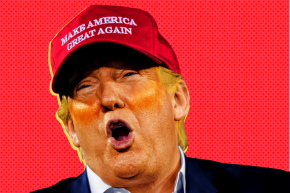 A prominent anti-immigration group formally revoked its support of Donald Trump in a scathing takedown that claimed the new president — barely 100 days into his job — had already abandoned his signature campaign promises on immigration.

The Americans for Legal Immigration political action committee pulled no punches when it accused Trump of “betrayal” and yanked its endorsement of the president in a letter on Tuesday. The PAC chided the president for not immediately ending the Deferred Action for Childhood Arrivals, a program created by President Barack Obama that shields some young undocumented immigrants from deportation.

It also said he “caved” and “retreated” from budget negotiations with Congress over his proposed wall along the U.S.-Mexico border. (Trump had initially vowed to force inclusion of funding for the wall in the latest budget, before backing off that demand.)

“We were so hopeful that Donald Trump would be a man of his word because the campaign promises he made to Americans were the things America needs to do to survive and thrive, but unfortunately, Trump has made it clear he cannot be trusted on his most powerful campaign issue of stopping illegal immigration and amnesty,” William Gheen, the PAC’s president, wrote in the letter. “Close inspection of his actual immigration policies show he is similar to Bush and Obama on amnesty for illegal immigrants.”

Gheen’s outfit, which once urged Americans to send their dirty underwear to detained undocumented immigrants, enthusiastically backed Trump in the Republican primary last year as he squared off against a large field of conservative candidates. Throughout the campaign, Trump’s repeated vows to deport all 11 million people living illegally in the U.S. and build a “big beautiful wall” along the southern border electrified immigration hawks and helped fuel his run for the White House.

Americans for Legal Immigration says that it is the nation’s only political action committee focused on fighting for fewer undocumented immigrants in the U.S and has thousands of members, according to its website. The group raised and spent more than $200,000 in the 2016 elections, data compiled by the Center for Responsive Politics, a watchdog group, shows.