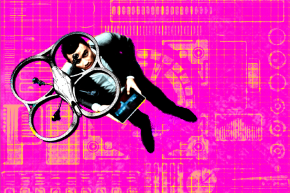 So You Bought A Drone, Now What?
By Alejandro Alba

So You Bought A Drone, Now What?

When people first get a drone they do one of two things: take cool, scenic aerial shots to post on social media or race it around the park. But aside from that, there’s not much else to do with a quadcopter. While drone sales seem to have doubled in 2016 and don’t show signs of slowing down as prices get cheaper, they’ll never be as popular as say, smartphones, unless they’re good for more than that.

Drone owners have been getting creative with new ways to use their toys — like the man who tied a Halloween ghoul ornament to torment joggers at the park or the kid who kept making headlines for attaching weapons to drones. Now there’s also companies thinking outside the box and creating new experiences for the average drone user. One of those companies is Edgybees, an Israeli firm that is releasing an augmented reality game for DJI drones.

CEO Adam Kaplan told Vocativ that he built Edgybees on the idea that there needed to be more things for people to do with their drones. Edgybee’s game, “Drone Prix,” allows users to master their piloting skills in a “fun, safe, and immersive” digital obstacle course.

More Finally! A Selfie-Taking Drone Takes To The Skies

“Right now they have a limited number of functions, but I think that in the near future we’re going to be using drones for all kinds of purposes, from home security to food delivery and beyond,” Kaplan said. “Think of what we used phones and computers for 10 or 20 years ago and what we use them for now.”

Futurists have compiled a giant list of things drones could potentially do in the future — 192, to be exact. Most of them are pointless, like the idea of a comedian drone, which “flies in and performs random acts of comedy,” but there are other uses that can actually benefit society such as topological surveying, construction monitoring, mosquito repellent sprayers, and animal herding or monitoring.

“I think that the future use that is most inspiring would be delivering humanitarian relief to people in war zones,” Kaplan said. “Imagine if there was a way to get food, medical supplies and other items to people in the middle of the war in Syria or in deserts of war-torn African countries without risking the lives of pilots flying planes or helicopters to get them there.”

While all these drone uses seem great, they’re still not things an ordinary person can do. There still needs to be more consumer-oriented activities that make it worth investing $1,000 or a couple hundred into a toy helicopter, depending on how fancy a model you get.

DJI, one of the largest drone companies, is trying to help solve that issue with its software developer kit, which allows any programmer to create software, which is how Edgybees is doing its work. “The Drone Prix app is one of the many great examples of how our [software developer kit] has opened doors to new creative possibilities and expanded developers’ ability to build exciting new custom applications,” Taehyun Moon, DJI’s director of brand management, said in a press release.

Journalists have also been on the forefront of making drones useful by creating courses that teach people of innovative ways to tell stories — of course, you have to register your drone first. Then there’s also filmmakers and artists who’ve used drones to capture award-winning movies.

Kaplan said that although there’s not much to do with drones at the moment, “Drone Prix” will definitely pave the way for other drone applications to get developed and entice people to buy a drone.

“Obviously the best responses come from people who have spent lots of money on a DJI drone and have really been waiting for someone to come up with something fun to use it for,” Kaplan said. “Many people are saying to us, ‘What took you so long?’ And some non-drone owners feel they have a reason now to justify buying a drone.”