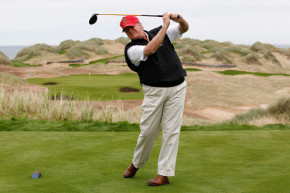 Donald Trump Invented A Civil War Battle, Made A Plaque To Remember It
By Joe Lemire

Donald Trump Invented A Civil War Battle, Made A Plaque To Remember It

The president made a gaffe about the Civil War Monday, but it wasn't his first time straying into ahistorical strangeness

President Donald Trump’s murky understanding of the Civil War made headlines Monday, when in a bizarre radio interview he expressed sincere befuddlement about why we fought that thing. (It’s slavery.) But, it turns out, his troubles with the history of the Civil War go back much further.

“I mean had Andrew Jackson been a little later you wouldn’t have had the Civil War,” Trump said in a SiriusXM interview.  “People don’t realize, you know, the Civil War, if you think about it, why? People don’t ask that question, but why was there the Civil War? Why could that one not have been worked out?”

Of course, Jackson died 16 years before the Civil War began, and he was the slave-owning founder of the Democratic party — whose secessionist Southern faction started the whole conflict in the first place — both of which complicate the president’s reasoning. These facts were gleefully pointed out by armies of social media users Monday afternoon.

But Trump’s comments also make this an opportune time to refresh our memories: the president has delved into revisionist history with the Civil War before. After he purchased and renovated what would be come the Trump National Golf Club in northern Virginia, he directed the installation of a flagpole and plaque commemorating “The River of Blood,” a casualty-ridden battle on the site now between the 14th and 15th holes.

Or so he claimed. The New York Times, however, polled area historians who unanimously concurred on a key point: No such battle had ever taken place.

Before the Bowling Green Massacre, there was the River of Blood, fake Civil War battle at Trump golf course. https://t.co/EvFeHjP6k1

“No. Uh-uh. No way,” Richard Gillespie, the executive director of the Mosby Heritage Area Association that works to preserve an 1,800-square-mile area that includes the golf course, told the Times. “Nothing like that ever happened there.”

Even Trump-supporting Newt Gingrich, the former House Speaker who co-wrote four historical fiction novels set during the Civil War, called the monument “strange.” Gingrich, a member of the club, nevertheless said, “I am not going to lead a demonstration over this. It’s a country club with a golf course, for Pete’s sake.”

Best of all were Trump’s defenses for his plaque. First, as is his way, he questioned the authority of the historians, saying, “How would they know that? Were they there?” In other words, no one could possibly know anything they did not personally witness.

Trump also claimed to the Times that “numerous historians” had told him about the River of Blood battle before walking that back to historians telling “my people” and then declining to divulge who any of those people or historians actually were.

Furthermore, Trump basically asserted that the battle had to have happened because of probability.

“That was a prime site for river crossings,” Trump told the paper. “So, if people are crossing the river, and you happen to be in a civil war, I would say that people were shot — a lot of them.”

Indeed, historians can corroborate that there was a major war crossing nearby, but Gen. J. E. B. Stuart led 5,000 Confederates across the Potomac on their way to fight at Gettysburg — but did so without bloodshed. At least Trump owned up to being the origin of this story; instead of his usual “many people are saying” concoction, he did utter “I” as the subject of that very misleading sentence.

Really, the crux of the matter is this mind-twisting logical puzzle that might have eluded even Aristotle: Could Andrew Jackson have prevented a battle that never actually happened?