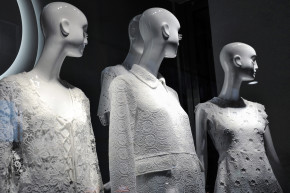 Science Says Mannequin Bodies Are Just As Unrealistic As You Think

It’s nice when science validates what you already perceive to be true — in this case that all those mannequins modeling clothes in storefronts look nothing like normal, healthy human beings. A study in the Journal of Eating Disorders shows that, as a rule, female mannequins represent an underweight body size. Male mannequins, on the other hand, rarely do.

“We became interested in this topic after seeing some news report about members of the general public noticing that some mannequins in fashion stores were disturbingly thin,” said lead researcher Eric Robinson in a press release. “Around the same time we had also read news coverage that fashion retailers had responded to this concern and adopted more appropriate sized mannequins, so it felt like an interesting research question to examine.”

Turns out, it’s pretty hard to find these “appropriate sized” mannequins. Researchers from the University of Liverpool studied 58 mannequins in two major shopping districts — or “high streets,” as they call them in the UK. Not too surprisingly, shop owners weren’t enthusiastic about the idea of having researchers measure their mannequins, so they had to instead eyeball the figures and match them to images of real, live humans. Then, based on the body mass index of the matched humans, researchers made a best guess as to the body size the mannequins represented.

Obviously, the fact that girls and women are bombarded with images of extremely thin mannequins has serious potential implications. Past research has suggested that these kinds of imagery can have an impact on bodily self-esteem — for example, studies have found that girls who play with Barbies are more likely to internalize ideals around thinness. The researchers behind the current study say their findings suggest it’s time for shop owners to truly start using “appropriate size” mannequins.

“We of course are not saying that altering the size of high street fashion mannequins will on its own ‘solve’ body image problems,” said Robinson. “What we are instead saying is that presentation of ultra-thin female bodies is likely to reinforce inappropriate and unobtainable body ideals, so as a society we should be taking measures to stop this type of reinforcement.”