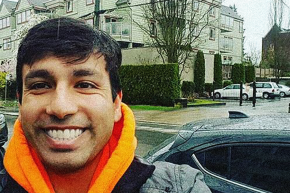 This Muslim Immigrant Is Running 3,000 Miles For Clean Water
By Alasdair Wilkins

This Muslim Immigrant Is Running 3,000 Miles For Clean Water

Hasan Syed remembers the lack of clean water in his native Pakistan. He was shocked to learn many tribal communities are in the same boat

Most days, Hasan Syed wakes up by nine. He tries to wake up earlier, but it’s difficult when his body needs so much sleep. His breakfast is simple: two eggs, two pieces of toast, and a bit of water, and then he heads out the door for another day of running. The plan is to cover 30 kilometers, or a bit under 20 miles. That’s been his routine since April 10, when he began his 3,000 mile-run in Vancouver that he hopes to finish by October in Ottawa.

None of this comes easy for Syed. “I didn’t train for this — I’m not a marathon runner,” he said. “I hate running, actually, to be quite honest.”

But Syed keeps running, and has covered more than 200 miles so far. The goal of his journey is to raise money and awareness about the lack of clean drinking water for many of Canada’s indigenous communities. His group’s GoFundMe page has raised nearly $13,000 from more than 100 donors, though they are still a long way off their ultimate goal of a dollar each from all 36 million Canadians.

His cause sorely needs the money. There are currently more than 150 active boil water advisories due to unsafe drinking water for First Nations communities in Canada’s 10 provinces, not even including its Arctic territories. Another 15 communities are advised not to use the water at all because of a chemical contaminant. Most advisories have been in place for a year or more. The Neskantaga First Nation of northern Ontario has been under a boil water advisory since February 1, 1995.

While a cross-country run is intended to raise national awareness, Syed and his team are trying to build at a local level, meeting with First Nations communities and other organizations along the way in hopes of building partnerships to improve indigenous water access. Their current goal is to raise $23,000, which will likely go toward the purchase of water filtration units for one or more First Nation communities. A long-term solution, however, will likely require political action, which is why Syed is looking to meet with local leaders along the way to Canada’s capital.

Syed learned about the issue 18 months ago at an event bringing together the First Nations and Muslim communities of Thunder Bay, Ontario. His family had immigrated from Pakistan when he was 10 years old, and the problems facing local indigenous communities reminded him of his experiences growing up in Karachi. He recalled being five or six and watching his mother boil water in a big pot before putting it on ice in the living room, just so that his family would have cold water to drink.

He had figured such worries didn’t exist in Canada. “As an immigrant, coming here I thought everything was great,” he said. “I guess when I found out about this issue it shattered this perfect little fairy tale I had.”

Syed has spent the past week based around Kamloops, British Columbia, about 200 miles northeast of Vancouver. It’s still early days for his run, and he admitted he’s just now realizing how big a task it is. He hoped to cover about 15 miles a day, but encountered trouble early at this pace, feeling his muscles getting tense. Walking wasn’t any easier, and the blisters continued coming.

But Syed has kept going, meeting with both First Nations and Muslim groups along the way. He and the rest of the Access 2 Clean Water team, many of whom are also Muslim graduates of Thunder Bay’s Lakehead University, see the run as an opportunity to build solidarity between Canada’s original inhabitants and some of its more recent arrivals.

While the lack of clean water in Canada was a shock to Syed, it’s an all too familiar experience for Access 2 Clean Water colleague Coty Zachariach. He’s a member of the Mohawks of the Bay of Quinte First Nation in Ontario’s Tyendinaga Territory, located on Lake Erie about 130 miles north of Rochester, New York. His community has been under a boil water advisory since October 17, 2003. “And that’s when people started noticing,” Zachariah told Vocativ. “That’s when it was government acknowledged. The problem had been going on for years before that.”

Zachariah now lives in Toronto for school, but he still has plenty of family members who have to worry about getting sick from a glass of water or showering. Some purchase their own household water filtration units, but those most in need of them are typically those least in a position to afford it. In 2011, the median income in Canada was $30,000. In the Tyendinaga Mohawk Territory, it was just $17,000.

“A lot of people don’t have to worry about filtration systems,” said Zachariah. “They pay the rent and the water works. They’re not spending thousands of dollars on these filtration units for their houses because it’s just something that’s just taken for granted.”

To Zachariah, making sure there’s clean drinking water is fundamental to the survival of villages and towns, allowing communities to endure instead of forcing people to leave their homes for cities just to get basic services.

“We’ve already been displaced from our original homeland,” he said. “To me it means a lot to put in the infrastructure in our communities so that we can be healthy.”