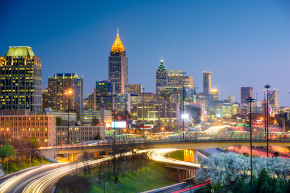 More than two dozen U.S. cities large and small are acting ahead of the nation

The Atlanta City Council passed a measure Monday committing the city to run entirely on renewable energy by 2035. Atlanta becomes the largest city in the South and the 27th city in the US to make such a commitment, intended to cut carbon emissions at a city-by-city level. A specific plan on how the city will accomplish this 18-year transition is due by January 2018.

City councilman and mayoral candidate Kwanza Hall introduced the measure, which calls for the city’s own operations to run on completely clean energy by 2025, with private citizens and businesses following a decade later. Such measures have grown in popularity in recent years, as Atlanta joins other major cities like Chicago, San Diego, and Salt Lake City in passing such a measure. While these big metropolises have given themselves more than a decade for the energy transition, a few smaller cities like Aspen, Colorado, and Kodiak, Alaska, are already able to get their power from entirely renewable sources.

It won’t be possible to fully judge the feasibility of the plan until January, when a full breakdown will include specific milestones and budget estimates. But Monday’s measure does already call for several specific initiatives to make Atlanta’s energy use more efficient, including weatherization, smart grids and microgrids, and the use of industrial waste heat, automated lighting, and solar-powered hot water heaters. The measure also specifically says that low-income residents of Atlanta should be included in the energy transition, with part of the plan being the creation of new, better-paying jobs in the renewable sector.

Atlanta currently ranks 40th out of America’s top 50 cities in terms of solar cells installed and operational, but Georgia as a whole is a state that has already begun using more clean energy. About twice as many Georgians work in renewable energy than in fossil fuels, and the local utility company Georgia Power is set to install 1,600 megawatts of new solar energy by 2021.