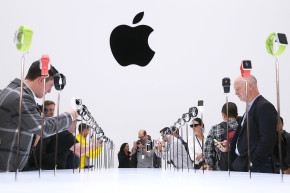 What Could Apple Buy With $250 Billion In Cash?
By Alejandro Alba

What Could Apple Buy With $250 Billion In Cash?

Apple is the richest tech company in the world, there’s no doubt in that. But exactly how rich is it? The iPhone maker is expected to report Tuesday at its quarterly earnings that its stockpile of cash is now more than $250 billion.

Apple’s hoard, which doesn’t account for some debt, makes it richer than Microsoft (which has a stock pile of $126 billion), and its cash even exceeds the market value of Walmart and Procter & Gamble. Although much of it is held overseas, this cash is considered to be greater than any other company in recent U.S. recent history, according to the Wall Street Journal. CEO Tim Cook has avoided big company acquisitions — it’s biggest was Beats Electronics in 2014 for $3 billion — but if he wanted to, he could buy many established tech companies in Silicon Valley.

There’s a long list of companies that Apple could in theory acquire with its spare change, but a company like Netflix or Tesla could make more sense, analysts have speculated, since Apple is investing a lot in self-driving cars and entertainment. In fact, Apple has a cash box big enough (equivalent to about 285 million 256GB iPhone 7s) that it can purchase both Tesla and Netflix and still have enough money to pay the $88 billion in debt it’s gathered since 2012 in payouts to shareholders. Of course, all this is hypothetical.

Apple investors and shareholders have suggested Cook buys the two companies, but he has not commented on the idea publicly. Disney and Time Warner are two other media companies that have been rumored to be of interest.

However, if Apple doesn’t want to buy more tech or media companies there a few other fun things it could do with its money. It could buy everyone in Indonesia (population 260,580,739) an iPhone; buy 800 billion individually wrapped Twinkie’s; or buy 66 billion pre-teens a Starbucks caffé latte. Then again, Apple might just decide to save the money just in case it has another bankruptcy scare like it did in the 1990s under Steve Jobs.