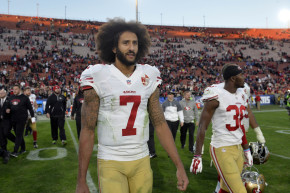 Colin Kaepernick is still looking for a job in the NFL, with a former teammate speculating that he’s been “blackballed” as a result of last year’s national anthem protest, but the former 49ers quarterback is doing his best to help other applicants with less than perfect résumés find gainful employment.

There are all kinds of theories about why Kaepernick does not have a football contract — some of them football-related, most of them not. As an unnamed team general manager recently told Bleacher Report, “Some teams fear the backlash from fans after getting him. They think there might be protests or [President Donald] Trump will tweet about the team.” Indeed, Trump himself later referred to that report in a speech, saying of his audience in Kentucky, “They like it when people actually stand for the American flag.”

One comparison between the two men is strikingly stark. When Trump held a televised fundraiser for veterans, he pledged one million dollars of his own money. Four months later, he had not given a cent of that donation until publicly prodded by Washington Post reporter David Fahrenthold, who won a Pulitzer for his work investigating Trump, his false claims of charitable donations, and his opaque finances.

Kaepernick, on the other hand, also promised to give away one million dollars last year in the wake of all the attention he was receiving for his anthem protest. In the name of transparency, he set up a website detailing each and every one of his gifts to meet his plan to donate $100,000 every month, often in increments of $25,000 or so. In January, for instance, he gave that amount to the Center for Reproductive Rights, Black Veterans for Social Justice, a Brooklyn-based climate advocacy non-profit, and a California group helping immigrants obtain citizenship and avoid deportation. (Before anyone complains about Kaepernick’s elongated donation schedule, remember that his career earnings are measured by millions and Trump’s by billions, a differentiating factor of a thousand.)

This winter, Kaepernick also arranged for a plane to take food and water supplies to Somalians in need, leveraging his profile to meet a two million dollar GoFundMe goal in just four days. When Trump’s proposed budget threatened massive cuts to Meals on Wheels, Kaepernick gave them $50,000.

Many athletes give their time and money to charity, but Kaepernick’s concerted efforts rise above the norm and rebut all the misguided, half-witted claims that his anthem protest was in any way about raising his own profile rather than calling attention to the country’s social and economic injustices. As his former 49ers coach Jim Harbaugh wrote about him on Time’s 100 most influential list, “His willingness to take a position at personal cost is now part of our American story. How lucky for us all and for our country to have among our citizens someone as remarkable as Colin Kaepernick.”

“He was a great partner,” Livingston of 100 Suits told TMZ Sports. “He went above and beyond all expectations to help give these guys a second chance.

“He’s a hero in my eyes, he’s a hero in the eyes of the guys who are going to be receiving these suits. Colin, you’re the man to me, you’re a hero to the men of South Jamaica Queens.”

Long known as an on-field difference maker, Kaepernick is proving to be even better off the field.