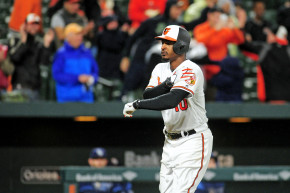 On Monday night in Boston—which, as a great many Caucasians born in or living within a 100-mile radius of the Greater Boston metropolitan area will loudly tell you, is not a racist city—one fan chucked snacks and multiple others hurled racist insults at Baltimore Orioles centerfielder Adam Jones.

“A disrespectful fan threw a bag of peanuts at me,’’ Jones told USA Today’s Bob Nightengale, “I was called the N-word a handful of times tonight. Thanks. Pretty awesome.’’ Jones said he’d been informed that up to 60 fans were forcibly removed from Fenway Park and Nightengale received confirmation from Red Sox officials that the individual who threw the peanuts was thrown out, but challenged Jones’ calculations, estimating that the total number of ejectees was less than half of that.

The Red Sox issued a formal apology to Jones on Tuesday morning, and Boston Mayor Marty Walsh provided this statement:

“This is unacceptable and not who we are as a city. These words and actions have no place in Fenway, Boston, or anywhere. We are better than this.”

When asked by USA Today how he thought behavior like this could be curbed, Jones called for stricter punishments:

“It’s pathetic,’’ he said. “It’s called a coward. What they need to do is that instead of kicking them out of the stadium, they need to fine them 10 grand, 20 grand, 30 grand. Something that really hurts somebody. Make them pay in full. And if they don’t, take it out of their check.

In January, Boston Red Sox pitcher David Price, who comes from a multiracial family, told the Boston Globe that he too had been subjected to racist taunts at Fenway Park. And in a previous interview with Nightengale, Jones explained why, when multiple athletes in the NFL and other sports were joining Colin Kaepernick’s National Anthem protests, Major League Baseball players remained silent.

“We already have two strikes against us already,’’ Jones said, noting that African-Americans make up only eight percent of MLB rosters. “So you might as well not kick yourself out of the game. In football, you can’t kick them out. You need those players. In baseball, they don’t need us.

“Baseball is a white man’s sport.’’

Jones added that Kaeperinick found himself on the receiving end of the exact same racist slur he heard on Monday, but when a person of color exercises their First Amendment rights, there necessarily is a backlash.

The Red Sox were the last MLB team to add an African-American player to the roster, inking Pumpsie Green in 1959, some 12 years after Jackie Robinson’s debut, largely because the team’s then-owner, Tom Yawkey, was an unapologetic bigot. But they’re far from the only city that’s struggled to slough off some pretty backward thinking.

During the offseason, Orioles general manager Dan Duquette was asked why the team chose not to sign Jose Bautista, then a free agent. Duquette explained that Orioles fans prefer “a working-class-type baseball player” who could plausibly be seen working on a construction site were he not playing pro ball. As an example of a “gritty” type, he cited Mark Trumbo, who had logged a grand total of one season with the team, and not Jones, a five-time All-star and four-time Gold Glove-winner has spent his entire 12-year career in Baltimore.