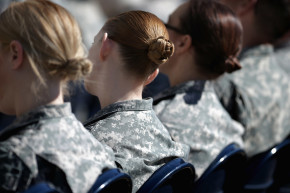 Many service members say they still face reprisal and ostracism after reporting assaults.

The Department of Defense’s 2016 report on sexual assault in the military, released on Monday, shows that fewer assaults are occurring and service members are more likely to report them when they do. But many service members said they still faced reprisal or ostracism because of their reports, and would not recommend that others report their assaults.

While the report showed a slight increase in reports of sexual assault from 2014, it found that the number of estimated assaults (based on a survey completed by about 150,000 active duty members) had decreased by close to 27 percent, going from 20,300 in 2015 to 14,900 in 2016. Of the estimated 14,900 assaults, 4.3 percent of female service members and 0.6 percent of males “indicated experiencing some form of sexual assault in the year prior to being surveyed.” If those estimates are accurate, this means service members are more likely to report assaults, possibly because of the military’s efforts to increase awareness and encourage them to come forward.

But “more likely” still doesn’t mean the majority of them do, as the DOD estimates that only one in three victims reported their assault in 2016. Again, this is still an improvement over the one in four victims who reported assaults in 2014, and the one in 10 who reported them in 2012. The report also found that men were increasingly likely to report when they were sexually assaulted, with nearly one in five reporting an assault in 2016 compared to one in 10 in 2014.

For the people who did report being sexually assaulted, the outcome was not always a good one. One-third of female service members and two-fifths of men who reported their assault said they would not recommend others do so. And three-fifths of service members, or 59 percent, who reported assaults then faced reprisal of some sort — though only slightly more than half of those assaults were considered to be prohibited by military law.

About 30 percent of those who reported assaults said the backlash they then faced came, at least in part, through social media. Last March, the Marines had to issue new social media guidelines after it was found that several of them were posting naked photos of female Marines in various social media groups. Other branches of the military also investigated reports that such behavior was happening among their service members. The report’s data indicates that the Marines already had the beginnings of a nude photo social media problem even in fiscal year 2016, which ended several months before it became publicly known, with 2.3 percent of female Marines saying someone they worked with took or shared a sexually suggestive photo of them without their consent. That was considerably higher than the percentage of female service members in the Army (1.5), Navy (1.6) and Air Force (0.5) who reported these experiences.

Navy Rear Adm. Ann Burkhardt, the director of the DOD’s Sexual Assault Prevention and Response Office, said on Monday that the decreased estimated incidences of assaults and the increased reporting of them was a good sign, but not good enough. There was still work to do.

“The hard truth is still far too many of our people find their lives changed by this crime, and there are far too many who continue to suffer in silence,” Burkhardt said.

She added: “I’ve seen first-hand how destructive sexual assault can be to the effectiveness of our fighting forces. We also owe it to our people to deliver the best possible support for those who experience this misconduct.”