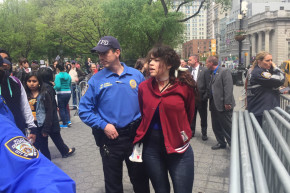 Alt-Right Provocateur Arrested At May Day Protest
By Ryan Beckler

Brittany Venti, an “alt-right” social media provocateur, was arrested at a May Day demonstration in New York City on Monday afternoon after tensions between left-wing activists and their “alt-right” foes flared in a crowd of about 500 people.

After about an hour of peaceful demonstrations, Venti and anti-fascist (Antifa) protesters clashed, eventually resulting in Venti’s arrest and a bloodied protester. The moments leading up to her arrest were captured on a Periscope stream. After the arrest, she claimed someone hit her with a stick (you can judge for yourself here.) It’s not yet known with what crime, if any, Venti has been charged.

When asked “what do you have to say to your fans,” she replied, “free Brittany Venti!”

Another scuffle broke out between Antifa protesters and Trump-supporting Libertarians about 30 minutes later, the latter group eventually being be led across the street. The faction of Trump backers, about 30 people at its height, chanted “Build the wall!” and “You lost!” to the May Day participants in Union Square.

Police presence steadily grew throughout the afternoon, with at least 100 officers watching over the crowds, and barricades separating the two groups. Antifa groups are planning a “black bloc” protest — where they often wear black masks and hoods and have been known to vandalize public and private property — later in the day Monday at New York City’s Union Square.

Demonstrations on May Day, a day designated to celebrate the workers and labor rights, have been going on in cities across the country. Many of the demonstrations have been centered around one theme: immigration. The groups hope to draw attention to the contributions made by undocumented workers who they believe are threatened by Trump and his hawkish immigration policies. The demonstrations are expected to last into the night with rallies and marches scheduled across the country.