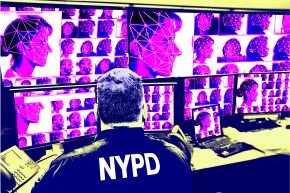 Police reportedly started the practice in 2011, but privacy advocates say they're dodging the law by refusing to talk about it

A privacy-minded academic think tank is suing the New York Police Department over its refusal to share information about its secretive face recognition program.

Georgetown University’s Center on Privacy and Technology announced a lawsuit Tuesday over what it says is a failure to comply with the state of New York’s Freedom of Information Law (FOIL).

NYPD officers have told the press that the department has a substantial face recognition operation that began in 2011. The technology has reportedly been used at least 8,500 times, finding 3,000 matches and helping with some 2,000 arrests.

More Only Cops, Not Public, Will Have Easy Access To NYPD Body Cam Footage

But when CPT filed requests for supporting documents through the state’s freedom of information law, which gives the public access to government documents, the NYPD repeatedly insisted they don’t have training manuals or user guides.

“It’s pretty widely used, and we contend there’s evidence they do have policies,” CPT associate Clare Garvie told Vocativ. “If they indeed cannot find those records, that’s far more worrying, because that indicates they’re operating this unit without adequate training, without an internal policy.”

The sole document the NYPD was willing to share is a Chief of Detectives memo that tells officers how to properly submit a request for a facial recognition search. That’s further evidence of the existence of the NYPD’s program, but doesn’t illuminate how it’s used, what privacy protections are in place, how the system was bought, or who manufactured it. For purchase invoices, Garvie said, the NYPD didn’t deny such records existed, but denied that they could be requested by FOIL — which is also cited in the lawsuit.

“We sent 100 records requests, back in 2016,” Garvie said. “Basically, they spent a year going back and forth to tell us ‘actually, we can’t find these documents,’ which we think strains credibility.”