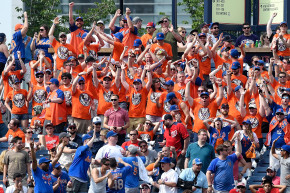 Report: A Lobbyist Got New York To Buy A Fake Championship Parade
By Robert Silverman

Report: A Lobbyist Got New York To Buy A Fake Championship Parade

On Saturday, The City of New York re-created the New York Mets 1986 championship parade, bringing back a slew of former stars to stand in front of City Hall, with the mayor himself kvelling about the team and saying their special brand of braggadocio, “personifies New York.”

That sounds nice. It would be, were it not for a report in the New York Times which reveals that City Hall neglected to mention that entire event was created by a journalist who is filming the pilot of a sports talk TV show, and yet the city still footed the entire bill. Oh, and this gift of taxpayer dollars was facilitated in part by a de Blasio campaign donor and bundler who has been implicated in multiple scandals, federal investigations, and allegations of pay-for-play.

City Hall really went the distance to make this nostalgia trip a quasi-reality, putting up period-appropriate advertising, draping the stage with bunting and banners, and bringing back former Mets greats Dwight Gooden, who received a key to the city from Mayor de Blasio, Darryl Strawberry, and a slew of their ex-teammates, Gooden famously missed the original parade in 1986, instead watching the proceedings on TV after spending the night and morning holed up in his dealer’s apartment on a drug-fueled bender, though at the time he and the Mets claimed he overslept.

As nice as it must have been for Gooden to finally enjoy the Mets’ World Series triumph some 31 years after the fact, this wasn’t just City Hall celebrating “a story of redemption” for Gooden and Strawberry – who recently reconciled following a very public and very ugly spat  – as Mayor de Blasio said during his weekly interview on WYNC on Friday.

This moment of feel-goodery was put together by Amy Heart, a journalist, host of the “Sports with a Heart” podcast, and facilitator of Gooden and Strawberry’s settled beef, who came up with the idea for the retro parade so she could film scenes for a still-unnamed show about “the human side of sports. The first episode will centered on Gooden and Strawberry’s attempts to get clean and sober.

According to the New York Times, Heart was able to get the city to donate the raw materials and laborers needed to stage the event thanks to a lobbying firm headed by James F. Capalino. Capalino was and is working for Heart pro bono, ringing up various unnamed City Hall officials to pitch the project, a spokesman confirmed, because his firm thought it was “a really inspiring idea.” Plus, “We have a few die-hard Mets fans on staff,” the spokesman said.

How much did all this cost? Heart doesn’t know, saying those “details” were beyond her purview, and the mayor’s office hasn’t crunched the numbers yet, though Eric Phillips, the mayor’s press secretary claimed, “This event took almost no resources to pull off,” seemingly forgetting the actual city resources that were used to pull this off.

Via the New York Times:

Mr. Phillips could not say how much the city paid for the event, which included banners, extra metal detectors (which appeared to go unused), the stage and a camera area (which was erected and taken down by city employees), as well as an exhibit about the Mets inside the City Hall rotunda.

City Hall also insisted it had no idea that Heart had brought Capalino on board. That said, they can’t have been thrilled to discover that he was involved, given that Capalino previously bundled $45,000 for Mayor de Blasio’s re-election campaign and his firm dropped $10,000 in the coffers of The Campaign for One New York, the non-profit 501(c)(4) organization that was established to push the Mayor’s agenda. The non-profit was shut down in 2016 and implicated as part of an larger investigation into pay-for-play allegations, including the controversial sale of Rivington House.

Oddly enough, Capalino pops up here as well. He served as a representative for both the non-profit seller and eventual for-profit buyer of a former nursing home on the Lower East Side, which sold for $28 million and was then flipped for $116 million to developers who wanted to build high-priced condos. That deal was made possible after the the deed restriction on the property was lifted by the city. Though the sale was eventually scuttled, a Federal investigation was ended in March without formal charges being filed against the de Blasio administration because of the difficulty in proving “criminal intent.”

Of course, de Blasio claims he stopped associating with Capalino a while ago.

In August, Mr. de Blasio said that while Mr. Capalino was “a friend, someone I talked to a lot over the years,” he had stopped communicating with him. “I do not have contact with him anymore,” Mr. de Blasio said at the time, “because of the atmosphere we’re in, and the ongoing investigations.”

Good to see New York City spending wisely and not using taxpayer dollars to serve the needs of well-connected individuals, while everyone involved maintains just enough plausible deniability to avoid taking the blame for this boondoggle.