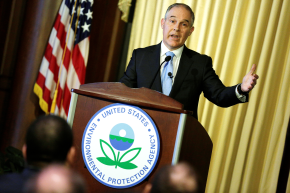 EPA archived its entire climate change section, but same info still up at NASA and NOAA

In its place was an explanation the page was being updated to reflect the agency’s new priorities under President Donald Trump and Administrator Scott Pruitt. With the EPA’s climate section now relegated to an Obama-era archive, the Trump administration has moved its internet presence in line with its longtime public climate denial  — except other White House agencies, including NASA and NOAA, haven’t yet gotten the memo.

In its now archived overview of climate change science, the EPA was unequivocal in affirming the scientific consensus that human activity is the primary driver of global warming. “Natural causes alone cannot explain all of these changes,” it read. “Human activities are contributing to climate change, primarily by releasing billions of tons of carbon dioxide (CO2) and other heat-trapping gases…” That position is in flat contradiction to that of Pruitt, who during a March appearance on CNBC’s “Squawk Box” raised spurious doubts on the role of carbon dioxide in shaping climate.

“I think that measuring with precision human activity on the climate is something very challenging to do and there’s tremendous disagreement about the degree of impact, so no, I would not agree that it’s a primary contributor to the global warming that we see,” Pruitt said.

As for Pruitt’s boss, Trump has occasionally conceded there might be some connection between human activity and climate change but has generally been a denier, going so far as to call global warming a Chinese hoax.

This is, of course, difficult to square with EPA’s now-disappeared statements that “most of the warming of the past half century has been caused by human emissions of greenhouse gases,” which includes “burning fossil fuels for heat and energy, clearing forests, fertilizing crops, storing waste in landfills, raising livestock, and producing some kinds of industrial products.”

Then again, it’s just as difficult to reconcile the Trump administration’s climate denial with the information still available on both the NASA and NOAA websites.

The former currently includes this description of the scientific consensus on climate change: “Ninety-seven percent of climate scientists agree that climate-warming trends over the past century are very likely due to human activities, and most of the leading scientific organizations worldwide have issued public statements endorsing this position.”

NASA also confirms carbon dioxide is the primary cause of global warming: “Humans have increased atmospheric CO2 concentration by more than a third since the Industrial Revolution began. This is the most important long-lived ‘forcing’ of climate change.” Similarly, the climate website for NOAA states, “Human activities have increased the natural concentration of carbon dioxide in our atmosphere, amplifying the natural greenhouse effect.”

It’s possible the NASA and NOAA climate pages are headed for similar removal sooner or later, but they still lack something the EPA has: a Trump-appointed administrator.

Whereas Pruitt has been on the job since his confirmation on February 17, the president has yet to even pick administrators for NASA and NOAA. In a press release on the changes, the EPA said the changes are “intended to ensure that the public can use the website to understand the agency’s current efforts,” which may well necessarily only become clear once permanent leadership is in place, even if statements from Trump and other administration officials have already made their opinions on climate change loud and clear.