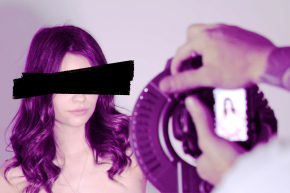 The producers of “Hot Girls Wanted: Turned On” finally broke their silence over allegations that their Netflix documentary features sex workers without their consent — but it wasn’t to apologize or express their sympathies. Instead, in an interview with Variety, they denied the accusations, mocked their accusers, questioned whether some of their critics were in it for fame, and alleged that sex workers have been pressured into fighting the documentary.

They did not address the fact that the series appears to out a performer’s legal first name.

But in the Variety interview, producers Jill Bauer and Ronna Gradus say that the accusations are either false or misleading. “The narrative has kind of become hijacked, that we exposed sex workers and that we put them in danger by telling the world that they were sex workers, when in fact we never ever did that,” Gradus said.

The producers take special issue with the claims of cam performers Effy Elizabeth and Autumn Kayy, who alleged on Twitter that the series used a clip of them performing on Periscope without any warning or asking permission. Gradus and Bauer argue that the inclusion of the clip constitutes fair use, a legal doctrine allowing for excerpts of publicly available materials.

That may be, but as Elizabeth told Vocativ, she now worries that she will be outed to her family as a sex worker. She is already visible as a sex worker on Twitter, Periscope, and the camming platform that she uses, but Netflix has an immensely broader audience. It’s an important distinction — a sex worker might feel comfortable sharing a scantily clad photo with her fans on Twitter, but feel dangerously exposed if that same image appeared on Facebook or in a mainstream news article.

It’s a distinction that Gradus appears not to appreciate. “They saw themselves, and then on Twitter, as themselves, using their own handles, tweeted out, ‘Oh my God, we’re on Netflix. Oh my God nobody told us. Oh my God, we’re sex workers and they’ve just shown us on Netflix,'” she told Variety. “So the great irony here is that they identified themselves as sex workers. And really that is a key piece of information that has been lost in this story.” The issue for Elizabeth and Kayy isn’t identifying themselves as sex workers in the context of Twitter, though, it’s having their images, while engaged in sex work, broadcast on a mainstream platform like Netflix.

When Variety asked Gradus “whether she felt that Elizabeth and Kay may be using their inclusion in the series to grow their profiles as performers,” she responded, “I don’t think we can make a comment on their intentions. But that’s a fair question that I think the public should think about.” In other words, Gradus is arguing that we should consider that, rather than having genuine grievances, these women might just be in it for the fame.

The Variety article gives little attention to the allegations of performer Gia Paige, although her claims are more explosive. She is featured in several scenes in the series and alleges that the producers had promised to cut her from the show. Paige says that she initially agreed to participate — and signed a binding contract — but when she changed her mind, she alleges the producers promised to cut her. She says these agreements took place through her then talent agent and fiancé, Riley Reynolds, who is featured extensively in the show. Reynolds confirmed her version of events.

However, Bauer says that Paige never, as the article puts it, “expressed to filmmakers a desire to be cut out of the final product.” The Variety article does not address the fact that the show features Paige’s legal first name, which she worries compromises her identity and could expose her to harassment from stalkers. That is part of why sex workers’ legal names are considered highly sensitive and private information — revealing a porn performer’s legal name, as the show did during a shot of Paige’s personal Facebook page, is a huge and potentially dangerous misstep. It’s part of why Free Speech Coalition called for the show’s distribution to be put on hold.

Despite these serious concerns — of sex workers being outed to their families and exposed to stalkers — it appears the producers of “Hot Girls Wanted” have little interest in offering any apology, or even sympathy, to their subjects. There are also important debates to be had here around fair use and journalistic ethics, particularly while covering marginalized communities, but Gradus and Bauer have shut down the possibility of such a nuanced conversation.

In fact, they ultimately entirely discount the concerns of the sex workers involved and chalk up their outcry to outside pressure. “The industry is very defensive about people coming in and shining a light on the industry and doing stories about it,” she said. “The allegations that have come out are probably the result of pressure they are feeling to stand in solidarity with the industry.” Gradus and Bauer set out to make a documentary about the experience of sex workers — but, now, it seems they aren’t willing to listen to them.