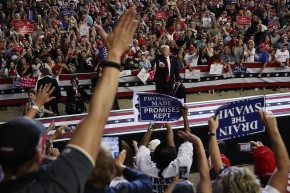 The $1 trillion budget will keep the government running until September. But it won't fund many of Trump's initiatives.

The $1 trillion budget deal Congress was able to agree to after a weekend of last-minute, shutdown-avoiding negotiations will, if passed, keep the government running through September. But it won’t fund many of President Donald Trump’s initiatives.

Chief among those is the border wall, one of Trump’s biggest campaign promises. Though Trump frequently said the wall would be funded by Mexico while he running for president, once he took office that changed to America paying for the wall now, and “eventually, but at a later date so we can get started early, Mexico will be paying, in some form, for the badly needed border wall,” according to a confusingly worded April 23 tweet. Mexico has repeatedly refused to pay for the wall, now or at a later date.

Trump had hoped that the new budget would include billions in funding for the wall, even threatening to withhold Obamacare subsidies from it (and, therefore, from lower income people on Obamacare) if it didn’t include funding for the wall. But Democrats refused to budge, and Trump backed off that threat within a few days. Last week, he said that a budget that increased funding for border security instead might be enough.

On Sunday night, Congress was able to reach a deal that appears to be a major compromise on many of Trump’s demands. The budget has not yet been released to the public, but according to NBC News, it would allocate an additional $12.5 billion for defense spending, which is still $18 billion less than Trump wanted (it could increase to $15 billion if Trump gives Congress a plan to fight ISIS, which should be no problem for him, as he has frequently boasted of having a secret plan to do just that). It gives $1.5 billion to border security, but that’s half of the $3 billion Trump wanted and does not fund the wall. It will increase funding to the National Institutes of Health even though the preliminary partial budget Trump released in March called for decreasing NIH spending. It only cuts the Environment Protection Agency’s budget by one percent and won’t cut government funding to Planned Parenthood at all. It also does not cut funding to sanctuary cities, another big Trump threat. And it provides funding to local law enforcement agencies that have had to spend millions to protect various Trump family members in their jurisdictions.

Democrat House and Senate leaders seemed pleased with the budget, with Chuck Schumer saying in a statement that it was a “good agreement for the American people,” and Nancy Pelosi calling it “significant progress.”

Speaker of the House Paul Ryan said the bill was in line with Trump’s demands, in that it would “rebuild our military and bolster our nation’s border security.”

But Fox News said the deal appeared to be “a lowest common denominator measure that won’t look too much different than the deal that could have been struck on Obama’s watch last year,” a stinging rebuke considering that Republicans hold both the legislative and executive branches of government, and that leaders from those branches loudly promised to reverse so many of the Obama era’s policies and budget allocations as soon as they got the chance. But Republicans also couldn’t pass the budget without some Democrat votes, and they would not get them without having to compromise. In order to avoid a government shutdown, they were willing to throw many of Trump’s funding requests under the bus.

While Congress scrambled to come up with a bipartisan budget, Trump is believed to have spent his Sunday afternoon playing golf, which appears to be one of his favorite activities and which he is estimated to have nearly 20 percent of his first 100 days in office doing, despite his many criticisms of his predecessor for doing the same (though Obama was a much less frequent golfer).

Both the House and the Senate must vote to pass the budget, which Trump must then sign off on. This must happen before 11:59 p.m. May 5 to avoid a government shutdown.