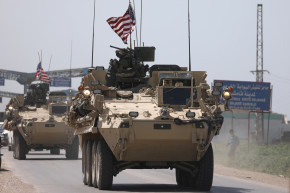 Syrians are furious after pictures showing American tanks and military vehicles driving through Kurdish territory in the north of the country were posted this weekend. Angry online commenters are calling it an “American occupation.”

Both Turkey and the U.S have sent armored vehicles to the Turkish-Syrian border, as tensions rise in the region. The build-up comes just a few days after Ankara dropped bombs that killed dozens of fighters from YPG, a Kurdish militia and crucial part of the U.S-backed Syrian Democratic Forces (SDF). That group is a key ally for Washington in the fight against ISIS in its self-proclaimed “capital” of Raqqa.

Turkey, however, considers the YPG a terrorist organization, the Syrian branch of its long-time enemy, the armed Kurdish Workers Party or PKK. The move comes as final preparations are underway to take out Islamic State in Raqqa and could damage efforts to push the terror organization out of its most important stronghold in Syria.

Social media users shared images and video of tanks flying American flags driving the streets Qamishli, a Kurdish-majority town in the north of Syria, and being cheered by local citizens.

“Is this the beginning of occupying and splitting Syria?” wondered one user. Another poster, who supports embattled Syrian President Bashar al-Assad, raged against the Kurds for allegedly welcoming the American troops, calling it “American occupation of Syria.”

Kurdish officials describe the U.S. troop movement as a “buffer” between them and Turkey, according to the Associated Press, while U.S. officials say it’s part of its cooperation with the Kurdish forces against ISIS in Syria. Turkish President Tayyip Erdogan, who is set to meet U.S. President Donald Trump in Washington in mid-May for the first time, called on America to “join hands and turn Raqqa into ISIS’ grave.”