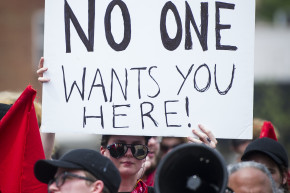 The country's biggest white supremacist groups were met by crowds of protesters in Pikeville, KY on Saturday

About 70 white supremacists, many armed with guns, held a rally in the small, Appalachian town of Pikeville, Kentucky, on Saturday, before they were booed out of town by demonstrators protesting the event.

White supremacists from the Traditionalist Workers Party, the League of the South and the National Socialist Movement — the country’s most-prominent neo-Nazi organization — gathered on the side of the town’s historic courthouse and screamed back and forth at anti-fascist (Antifa) demonstrators who were separated from the Nazis by police and barricades.

The white supremacists, the majority of whom traveled to the Pikeville from out of state, have been planning this rally for months; they looked at it as a chance to appeal to the residents of coal country, who they targeted because they’re predominantly white and, they believe, may be open to new politics after feeling forgotten for eight years of Barack Obama. Many of the counter-protestors also came from out of state with the specific goal of disrupting the rally.

But most of the town’s actual residents want nothing to do with Nazis or their foes.

“We have no clue why they would even pick Pikeville,” said Elizabeth White, who is in her 50s and has lived in Pikeville her entire life. “Why don’t they go disrespect their own homes, their own people, their own families?”

She added, “We need Trump to tell them to go back to their own place.”

“Jump over the barrier and come get me you fucking kike,” one NSM member screamed at counter-protesters about 30 feet away. He was held back by a large police presence. Nobody jumped any barriers, and no punches were thrown.

The rally in Pikeville was different from other recent rallies for a few reasons that may have quelled any potential violence. First, the police were very successful in keeping the two groups away from each other — the white supremacists parked in their own parking lot and were escorted from the rally by several officers as riot police kept the Antifas on the other side of the road.

Kentucky is also an open-carry state with reciprocity, meaning that if someone has an open carry permit in another state they can also carry a weapon in Kentucky. Like the neo-Nazis, many counter-protestors were also carrying guns — and so the consequences of a clash between the two groups could have been much more serious than a black eye. In other states where Antifas and white nationalists have gone at it, like a dust up at Berkley in California earlier this month, people weren’t openly walking around with AR-15s due to the state’s stricter gun laws.

Another factor that may have contributed to the lack of violence in Pikeville was a move made by the city commission prior to the rally. Last week, the commission issued an emergency ordinance banning masks and hoods in the downtown area during the rally. Many Antifa groups subscribe to the “black bloc” method of civil disobedience, which generally includes wearing dark masks and hoods to conceal their identities, like the “black bloc” protestor who famously punched “alt-right” leader Richard Spencer in the face earlier this year and who set fires and raised general hell on Washington D.C. during Donald Trump’s inauguration.

As the rally concluded, the white supremacists left Pikeville in a motorcade of about 30 vehicles protected by riot cops and many giving Hitler salutes directed at the counter-demonstrators on the other side of the police barricade.