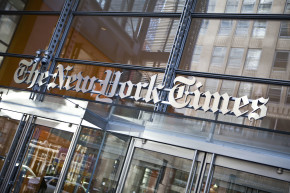 The New York Times published the debut column of noted climate skeptic Bret Stephens on Friday afternoon — traditionally a time when outlets dump stories they want buried and ignored. But Stephens’s column, which more or less argues that environmental advocates overstate the degree of scientific certainty around climate change, has been roundly rejected by the same climate scientists his piece purports to defend from exaggerated claims.

Stephens’s piece is too rambling to be easily summarized. A lengthy preamble on the Clinton campaign’s over-reliance on data — one intended to imply an untested political algorithm is somehow comparable to a century’s worth of accumulated data about the planet — segues into a reiteration of tired claims that, because climate science relies on probabilistic models of future outcomes, our understanding of climate change isn’t nearly as certain as people think. This moves into concern-trolling environmental advocates over being too dismissive of climate deniers or too aggressive in calling for policies to cut carbon emissions.

Stephens twice asserts he is not denying the science of human-caused global warming or its potentially disastrous consequences, but his entire column is a textbook example of misrepresenting the nature of scientific uncertainty to sow doubts where nearly all climate scientists say none exists.

But no need to take our word for it. Climate scientists have taken to Twitter to condemn both Stephens’s column and the New York Times for publishing him. Stefan Rahmstorf of Germany’s Potsdam Institute for Climate Impact Research, shared this letter explaining why he had canceled his Times subscription.

@CColose @BretStephensNYT And I'm happy to Skype, or give you a tour of the Climate Change Institute and talk science next time you're in Maine

An incredibly frustrating read from @BretStephensNYT and @nytopinion. Terrible analysis with no understanding of scientific uncertainty https://t.co/zb6CVIDwUN

Atmospheric and oceanic scientist Joseph Majkut, who is also the director of climate science at the libertarian Niskanen Center:

I'll say it again- I was not actually mad at the Bret Stephens hire because he is wrong or insulting, but that his views are unoriginal. 1/2

“One of the things that is most difficult is to explain to the political world what the meaning of scientific uncertainty is, because in the end there is no scientific conclusion that is not subject to being reopened to subsequent data,” he said as part of a larger conversation on science and politics.

“The difficulty is explaining to laymen and to the political world the meaning of those uncertainties without having people exploit the uncertainty to become a cause for inaction — for example in the case of climate change.”