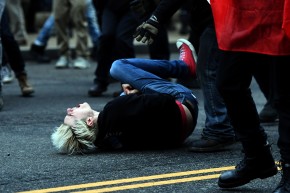 An anti-Trump protester screams after being hit by a paintball gun — AFP/Getty Images
By Shane Dixon Kavanaugh
Apr 28, 2017 at 2:04 PM ET

Protestors arrested during President Trump’s inauguration will face additional felony charges for their alleged role in the turbulent demonstrations that ripped through Washington, D.C., in January.

More than 200 people are now accused of inciting or urging to riot, conspiracy to riot, and destruction of property — all felonies — after a grand jury handed down a superseding indictment to prosecutors on Thursday. A majority of the protestors, many of them “Black Bloc” anarchists or anti-fascist activists, had been previously charged with felony rioting in the Inauguration Day melee that left streets in the nation’s capital littered with destruction and smoldering debris.

Authorities said the new charges stem from fresh evidence gathered by police and prosecutors. But members of Defend J20 Resistance, a supporting the protestors, believe they are meant to pressure activists into taking a plea deal before trial.

“The prosecutor is just using excessive charges in order to scare and coerce us into pleading guilty,” Sarah Hailey, one of the defendants, said in a statement Friday.

The intensified push from prosecutors comes as more than 100 of the defendants have agreed to reject any plea deal offer and work collectively to fight all charges, according to Defend J20 Resistance. Activists have repeatedly cast ongoing efforts by law enforcement to compile additional evidence against them as “desperate” and politically motivated.

Authorities claim that demonstrators caused more than $100,000 in damage as they paraded through the streets of D.C. smashing the windows of businesses and starting fires on January 20. The riot lasted about 40 minutes before police cornered about 250 of the roughly 1,000 activists and began deploying tear gas and firing rubber bullets into the crowd. Police said that six officers were injured during the confrontation and that one was knocked unconscious.

The riot came to an end when several of the activists crashed through a police line after they had been cordoned off by authorities. Those who did not get through the police line, about 230 people, were eventually arrested.