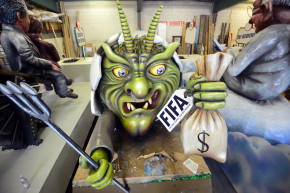 The FIFA Corruption Crisis Is Only Getting Worse
By Joe Lemire

The FIFA Corruption Crisis Is Only Getting Worse

Just as the names of key characters in Homer’s epic poems rarely appeared without an attached epithet—swift-footed Achilles, gray-eyed Athena—so too should the acronym for soccer’s governing body always be presented as corrupt FIFA. There’s no argument from corrupt FIFA itself, whose lawyers even wrote in court documents filed in the U.S. last year, “FIFA has become notable for the defendants’ bribery and corruption, not its many good works.”

The latest development in the multi-year, multi-continent scandal snaring dozens of top soccer executives is all too appropriate: Richard Lai, a member of corrupt FIFA’s audit and compliance committee, pleaded guilty to wire fraud conspiracy charges related to his receiving nearly $1 million in bribes, as well as facilitated the bribery of other officials.

“The defendant abused the trust placed in him as a soccer official in order to line his own pockets, and now he will be held to account,” Bridget M. Rohde, Acting United States Attorney for the Eastern District of New York, said in a statement. “The defendant’s breach of trust was particularly significant given his position as a member of the FIFA Audit and Compliance committee, which must play an important and independent role if corruption within FIFA is to be eliminated.”

Lai, an American citizen, has been president of the Guam Football Association since 2001 and a member of the Asian Football Confederation Executive Committee since 2007.

“‘Coach’ was code for payment, for me personally,” Lai said in court, per BuzzFeed. “I never used those funds to pay for a coach for Guam … I kept it for myself and never told anyone.”

The three key implications of this prosecution are that the gigantic investigation into corrupt FIFA very much remains active and ongoing; that the scandal is truly global; and that even those charged with keeping corrupt FIFA clean are corrupt themselves.

BuzzFeed noted that no new defendant had been charged since March 2016. The U.S. Department of Justice had first indicted 14 soccer officials and corporate executives in May 2015, and another 16 in December 2015.

Most of those involved confederation officials and sports marketing executives are in North and South America, although there were also allegations of corruption related to illicit payments to garner support for the 2010 World Cup in South Africa and an Australian Senate inquiry into funds transfers there. Europe was ensnared through the actions of former president of corrupt FIFA, Sepp Blatter, and Michel Platini, the French former head of the European confederation, who were both banned for ethics violations; also, late last year, Swiss authorities carried out searches related to allegations of fraud and money laundering related to the 2006 World Cup in Germany.

The Asian continent had been implicated in regards to suspicions of how Qatar secured the 2022 World Cup, but this confession from Lai that he received $850,000 in bribes from someone in the Kuwait Football Association and that he helped secure other willing bribe recipients in the Asian confederation suggests the scandal was far more pervasive in Asia than previously thought.

Truth be told, if you want scandal-free soccer, your only choice of continent is Antarctica. And, let’s be honest, that 3-3 tie back in 2006 between explorers from Bulgaria and Spain—in the purportedly first soccer game ever played on Antarctic—is suddenly very suspicious in hindsight, given that Bulgaria took a 3-0 lead before Spain rallied to tie the score. Just saying, we can’t trust anyone anymore.

Furthermore, the irony that a compliance official would be implicated in this scandal is just too rich, but the track record of corrupt FIFA honoring the work of internal investigators is, predictably, not good. Michael Garcia, an American lawyer tasked with an audit of the World Cup bidding process for 2018 and 2022, resigned abruptly in 2014, citing “lack of leadership” from the organization that did not take his findings seriously even though, he said, he uncovered “serious and wide-ranging issues with the bidding and [World Cup host] selection process.”

Fast forward to this week, and Le Monde reported that France’s National Public Prosecutor’s Office interviewed Blatter “as a witness” into allegations of corruption related to the 2018 and 2022 World Cup bidding process that awarded those tournaments to Russia and Qatar.

Corrupt FIFA only conceded the veracity of many bribery allegations when making that aforementioned court filing last year to seek financial restitution. The Russia and Qatar World Cup bids were not included, however, although prior Cups were: “It is now apparent that multiple members of FIFA’s Executive Committee abused their positions and sold their votes on multiple occasions.”

The lesson with corrupt FIFA will always be this: Where there’s smoke, there’s a raging inferno.