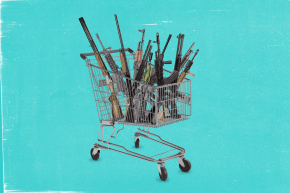 How Much Gun Sales Really Spiked After Sandy Hook Shooting

In California, the state with the best records, guns were a hot commodity in wake of both Sandy Hook and San Bernardino

Soon after 20 children and six school employees were killed in the 2012 mass shooting at Sandy Hook Elementary School in Newtown, Connecticut, it appeared there would be a real sea change in the gun control debate.

But amid many later disappointments in the push to increase gun regulation, it seems the only major lasting impact shootings like Sandy Hook have had is in creating more demand for guns.

In a new study published Monday in Annals of Internal Medicine, researchers examined 10 years of new handgun purchases in California from 2007 to 2016, using state records. They specifically focused on the weeks before and after the Sandy Hook shooting as well as the more local San Bernardino shooting that left 14 dead in December 2015.

There have long been anecdotal news reports and studies showing a bump in gun sales following mass shootings. But these had largely relied on records pulled from background check programs, which can be an imprecise measure of how many guns are being newly-bought or otherwise acquired. As much as 40 percent of new gun purchases may happen without a federal background check, according to research cited by the authors (these background check loopholes are part of what gun control advocates want to fix). However, California has some of the country’s strictest gun laws, requiring nearly all legal transfers to be brokered through a dealer or pawnbroker, as well as electronically recorded.

Using these records, the researchers found that gun sales and other types of acquisitions (from one owner to another) had steadily risen throughout the decade, but there was an unmistakable spike following both shootings that lasted about two months.

In the six weeks after Newtown, there were around 25,000, or 53 percent, more handguns acquired than expected. After San Bernardino, there were over 27,000, or 41 percent, more guns obtained. Proximity seemed to matter too: residents in San Bernardino bought 50 percent more handguns after Newtown, but 85 percent more in the wake of the shooting that made their town infamous.

“For some, a gruesome mass shooting may induce repulsion at the idea of owning a weapon,” the authors wrote. “For others, it may motivate acquisition. Mass shootings are likely to boost sales if they heighten concerns over personal security, because self-protection is the most commonly cited reason for owning a firearm.”

Other people though, they added, might buy guns over worries that the government would soon enact stricter gun laws, much as the Obama administration tried to after Newtown.

California’s record-keeping also allowed them to hone in on who exactly was buying these new guns. Ninety percent were men; 70 percent were white; and around 30 to 40 percent had bought guns for the first time. But while women only made up 10 percent of new sales, the rate of new women buyers were much higher in the weeks after a shooting than before. Comparatively, there was no real increase in the rate of black people buying guns.

In the short term, the researchers said, these spikes are a drop in the bucket ­— California alone has more than 30 million guns, and neither spike represented more than 10 percent of sales within a year. But they also noted that mass shootings have become increasingly more common over the years, suggesting their collective impact on gun sales isn’t anything to dismiss. That increase in guns owned, bore out by overwhelming research, will likely then help lead to more accidents, suicides, and spree killings. Currently, more than 32,000 people die from gun wounds every year.

After Newtown, President Obama signed more than 20 executive orders addressing gun regulation, several states passed their own restrictions, and the incoming Surgeon General Vivek Murthy called gun violence a health care issue. But following fierce opposition from Republicans and the National Rifle Association, the years after saw no sweeping gun reform policies, with more states passing laws that relaxed existing gun control restrictions. In the end, Congress extracted a pledge from Murthy at his confirmation to not use his position as a “bully pulpit on gun control,” one he dutifully carried out.

Unlike the previous administration, however, there doesn’t even seem to be a token gesture to the idea of stricter gun control. Just this past weekend, President Trump gave the keynote speech at the NRA’s annual convention, the first to do so since Ronald Reagan.