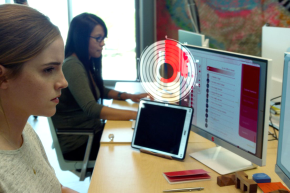 ‘The Circle’ Is The Facebook-Fueled Dystopia We’re Quickly Approaching

Silicon Valley is always watching, in a new movie based on the Dave Eggers book

In a society that’s always connected to social media and where people voluntarily share troves of private information with companies such as Facebook and Google, we’re not that far from living in the dystopian future that director James Ponsoldt presents in “The Circle.”

“The Circle,” which opens in theaters Friday, is an adaptation of Dave Egger’s 2013 novel about a corporation called Circle that records and stores massive amounts of user data including, social, personal, financial, and medical data. The concept might sound eerily familiar, and that’s because a lot of things in the movie (and the book) are borrowed from existing companies in Silicon Valley.

The film follows recent college graduate Mae Holland (Emma Watson) as she gets a job at Circle as a customer experience manager — all thanks to her friend Annie (Karen Gillan), who is one of Circle’s top 40 employees, known as the Gang of 40. Mae quickly outgrows her entry-level job and becomes the pet project of two co-founders (Tom Hanks and Patton Oswalt) as she volunteers to become totally “transparent” and live stream herself 24/7, except for when she has to use the restroom. From there on, drama ensues. Without revealing too many spoilers, she accidentally broadcasts her parents having sex and unintentionally sends a mob after her innocent childhood friend.

The references to today’s tech scene begin by mocking over-the-top offices. Circle seems to have everything: tennis courts, rock climbing walls, dorms, slides, dogs, yoga, nightclubs, spas, and three meals a day. Its office even looks like Apple’s new spaceship campus, and there’s also some reference to co-founders who have stepped away from big, successful companies because of a fall out with the other founding members. Ty (John Boyega) is essentially a Steve Wozniack or Eduardo Saverin.

However, the similarities between the movie and real life become more unsettling when it comes to dealing with issues of privacy, political influence, and transparency in the tech world.

The most relevant connection to today is the rise of live-streaming, especially with Facebook’s big push to “go live.” Everyone nowadays wants to let the world know who they are, what they’re doing, and where they are at all times by using Facebook Live, which is the real-life version of Circle’s Sea-cam that captures everyone’s whereabouts in real-time. Not only is live-streaming an emerging privacy and ethics issue, but it’s also been connected to some tragic events. In the past couple months there have been several murders, rapes, and suicides broadcasted on the social network.

The influence that tech companies have on politics is another issue that’s addressed in the film, as Eamon Bailey (Hanks) jumps on the idea of having every citizen sign up for a Circle account to vote and pay taxes, in order to save the government “billions of dollars.” In “The Circle,” the idea is that tech companies knowing everything about us is the only way to have a functioning government, because as Mae said, “privacy is theft” and “secrets are lies.”

In reality, though we’re not being forced to sign-up for a Google or Facebook account, these technologies are ever more necessary in our lives and lately have growing political influence, whether it’s in swaying elections by filtering news stories or in their direct relationships with governments in power.

Clearly “The Circle” shouldn’t be seen as a serious drama, rather a satire. In this role, it poses the questions, “what type of society do we want?” and “should tech companies have this much power?” It clearly shows why tech companies are obsessed with our data and what happens as we’re perpetually giving it to them — you’ll probably catch yourself during the movie saying something like, “that’s just like in real life.” If there’s any takeaway from the movie — aside form Emma Watson’s confusing accent — it’s that user privacy matters and corporate transparency are issues that will continue to shape our conversation for a long time.