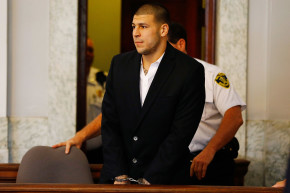 In the days following Aaron Hernandez’ shocking suicide, rumors have started to burble to the surface, with unnamed sources whispering that Aaron Hernandez’s sexuality may have played a role in both his past crimes and death.

To date, none of the reporting has uncovered evidence showing a causal connection, but that didn’t stop Newsweek from publishing an article six days ago citing “multiple law enforcement officials” who claim Hernandez’s 2013 killing of Odin Lloyd was motivated by Lloyd’s knowledge that Hernandez was “bisexual.” Per Newsweek’s sources, Hernandez feared that Lloyd would not only out his relationship with a former high school classmate, who Newsweek calls his “longtime male lover,” but would reveal that information to Hernandez’s then-fiancée, Lloyd’s sister.

Newsweek also throws out the claim—one that has gone utterly unmentioned by the swarm of reporters who have been covering Hernandez’s criminal acts over the last five years—that one of Hernandez’s co-defendants in the Lloyd murder used two gay slurs to describe Hernandez, calling him a “smoocher” and a “limp wrist.”

Without any concrete evidence that the above scenario was accurate, save for claims made by second- and third-hand anonymous sources, the reporter, Michelle McPhee, decided to run with yet another unfounded rumor. Namely, that one of the three suicide notes Hernandez wrote was intended for his “prison boyfriend” and “gay lover,” Kyle Kennedy, again citing unnamed law enforcement sources.

The Daily Mail, which is not a reputable journalistic entity, jumped on the bandwagon the same day as Newsweek, citing “sources close to the investigation” and claiming that Hernandez “left behind a handwritten suicide note for his gay jailhouse LOVER.”

That allegation appears to be falling apart. TMZ is reporting that the letters were written to Hernandez’s daughter, fiancee, and his lawyer, Jose Baez, who said in a statement, “Rumors of letters to a gay lover, in or out of prison, are false. These are malicious leaks used to tarnish someone who is dead.”

“Notwithstanding my unambiguous statement that there were no such letters, representatives, on behalf of an individual named Kyle Kennedy, continues to advise the media such a gay love letter exists,” the statement continued. “Accordingly, on behalf of the family of Aaron Hernandez, I am reaffirming, unequivocally, no such letter to Mr. Kennedy, or any other individual, in or out of prison, exists. l urge anyone continuing to spread these malicious untruths to cease immediately.”

On Wednesday, the individual Baez referenced but did not name, Kennedy’s lawyer, Larry Army Jr., held a press conference, which Newsweek took as an opportunity to double down on their gossip-mongering. At no point did Kennedy’s attorney confirm any of the reports, saying that choice rested with his client, though he did present a note from Hernandez to Kennedy sent three weeks prior to Hernandez’ suicide which read, “I think I’m going to hang it up, lol.”

But as ProFootballTalk notes, law enforcement officials might be eagerly putting this information out to cover their own hides for both Hernandez’s suicide and to unearth a clear motive for murdering Lloyd.

The “law enforcement sources” who are leaking this information on an anonymous basis apparently believe they are smearing Hernandez, possibly as a warning to those who plan to challenge whether prison officials failed to take steps aimed at preventing Hernandez from committing suicide.

Which brings us to the ugly core of this story: Newsweek’s reporting and all the blogs that scurried to aggregate the story contain the clear implication that being bisexual or gay is somehow something shameful. Still. In 2017.

At Out Sports, Cyd Zeigler and Jim Buzinski were the first to take the media to task, correctly pointing out that Hernandez is the only one who can determine his sexual identity. It’s a right that Hernandez alone should retain, even in death and regardless of his brutal crimes.

If Hernandez committed suicide because of his alleged sexual activities or if Lloyd’s murder was in fact motivated by his fear of being outed, then yes, it’s newsworthy. But claiming, as Newsweek did, that one unsubstantiated story gives them license to delve into the other is a weak rationale for some very thin and homophobic journalism.