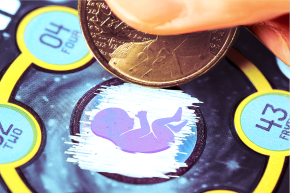 Yep, you read that right: an IVF doctor is holding a contest to give away free treatments

A New York fertility clinic is holding a contest for free in vitro fertilization — a baby raffle, if you will. It’s like the lottery, only instead of winning a million bucks, 30 winners will get the chance at a real, live genetically related human baby. In a dystopian flourish, their names will be announced on Facebook Live for the world to see.

The contest is open to women under the age of 44 who have been referred for IVF and have never been to New Hope Fertility Center. The cost of a single IVF cycle typically costs around $12,000 to $15,000, so the total value of the “prizes” on offer is at least $36,000.

New Hope says the contest is being held to mark National Infertility Awareness Week, which began this week. The aim, says a press release, is to “spread awareness about this growing epidemic and encourage open discussions about infertility and how it affects people around the country.”

Of course, it’s also a great way to drum up national — and even international — publicity for the clinic, which was founded by Dr. John Zhang, who is no stranger to the spotlight. He made headlines this year for using a controversial technique to create the world’s first “three-parent baby” and, before that, for facilitating the “oldest in-vitro pregnancy.”

But he isn’t the first to conceive of this baby lottery idea. The UK charity To Hatch held a similar lottery in 2011, only it (incredibly) charged people $25 to enter the contest. The scheme drew intense controversy, with critics alleging that it exploited the vulnerability of couples struggling with infertility. As a spokesperson for The Human Fertilisation and Embryology Authority, a clinic regulator, told The Independent, “We are strongly of the view that using IVF as ‘prize’ in a lottery is wrong and entirely inappropriate. It trivializes what is for many people a central part of their lives.”

At least in this case, women don’t need to buy a lottery ticket — but the winners will have to pay the cost of participating in the clinic’s social media stunt. The lottery will be drawn on May 5th at 2 p.m. during the live Facebook event.