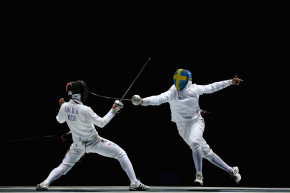 Now if only every other country would do this

Faced with uncertain financial support from the International Olympic Committee, middling local support, and the precedent that—on average—hosting the Games results in a 56 percent budgetary overrun, Stockholm announced this week that the city would not submit its expected bid to host the 2026 Winter Olympics.

The mayor of Sweden’s capital city, Karin Wanngard, explained to the Associated Press that she was concerned about the costs of the Olympic Games and wouldn’t be able to responsibly prepare under the current timeline, in which the IOC won’t offer a projection of its contribution until “at the earliest in November.” Her Social Democratic Party had backed the event as a growth and development opportunity—which is a dubious proposition—but at least she approached the endeavor judiciously and wasn’t going to write a blank check without careful cost consideration.

This seems entirely prudent given that the most recent Olympics host, Rio de Janeiro, has resorted to hawking used air-conditioners to vendors as barter to pay off its $32 million in debts.

“We want Stockholm to be a living city that is also able to host major events,” local Green Party leader Daniel Helldén told the AFP news wire. “But when there are great risks that the Stockholmers will have to foot the bill we believe saying no is the most responsible thing to do in this situation. We also see great risks that the event will not meet the city’s environmental and climate requirements.”

This is a stunning turnaround given that Sweden’s Olympic Committee had regretted not following through on a 2022 bid, had said in January that hosting the Games was “desirable,” had hired a new president of the Stockholm 2026 group preparing the bid just six days prior, and is taking the rejection kicking and screaming by saying Wanngard’s decision was “premature and probably based on unclear facts.”

The chairman of a different national sporting group, however, Bjorn Ericsson of the Swedish Sports Confederation, said he and his organization “fully respect the decision as we also believe in a realistic budget and a sustainable economy.”

This continues a fiscally sound trend of cities showing reluctance to host the Games as they are presently constituted. While the IOC has commissioned a broad Agenda 2020 reformation to its vision and charged four of its vice presidents to study revisions to the bid process, with that work due for publication this July, there’s little reason for any city to bid on an Olympics until the whole structure is transformed. Otherwise, they’ll face a legacy of vacant stadiums and huge debts.

So far, only Sion, Switzerland is officially a nominee for the 2026 Winter Games while six other cities—Calgary, Canada; Innsbruck, Austria; Lillehammer, Norway; Sapporo, Japan; Erzurum, Turkey; and Almaty, Kazakhstan—are all reportedly exploring bids. As long as at least two cities remain willing to host under present conditions, that competition will make the IOC less inclined to make the major changes it needs.

As a Calgary urban planner and former senior policy advisor to the mayor said, however, a lack of competition is just the antidote for more favorable conditions.

Then we have all leverage over IOC. It's our way or the highway. They'd have to bend, or no games. #yyccc