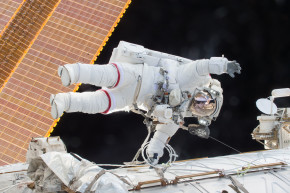 A new report from NASA’s Office of Inspector General reveals that the space agency is quickly running out of spacesuits made for spacewalks on the International Space Station.

The suits that these astronauts wear, called Extravehicular Mobility Units, have been in use for over 40 years, even though they were only made to last for 15. Because of this overuse, these space suits are causing astronauts many problems. These include helmets fogging up due to poor temperature regulation inside the suit, glove damage, and visual impairments caused by stinging or debris entering the astronauts’ eyes, among others.

“NASA must deal with a dwindling number of flight-ready spacesuits and with mitigating risks related to their design and maintenance,” the report reads. The lack of a formal plan to address this issue was also noted.

Significant incidents relating to the suits have increased from just two in the 1980s to nine in the 2010s, the worst of which occurred in 2013 when water from a leaking drink bag got into the helmet of a European Space Agency astronaut and interfered with his breathing. It was deemed a “high-visibility close call” that could have resulted in death. Since then, three other incidents in which water entered astronauts’ helmets have been reported.

In addition to issues with the suits themselves, the life support-containing backpacks attached to the suits are also approaching their end. Only 11 of the original 18 remain functional.

Though efforts to create a new generation of multimillion dollar spacesuits for astronauts out on spacewalks have already been commissioned, the report cites concerns that the new Orion Crew Survival System spacesuit won’t be ready in time to be tested on the ISS before it’s set to cease operation in 2024. It’s hard to say whether the suits currently in use will be able to last that long, let alone until 2028, should a proposed extension to the ISS’ operations be granted.