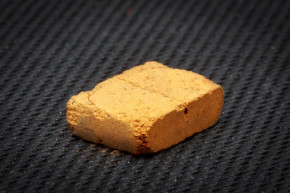 A Scientist Just Cracked The Code For Building On Mars

The first construction could use this simple, locally-made brick

If humans ever do stay on Mars long-term, chances are we will need to be able to build some structures without having to ship all the materials 50 million miles from Earth. But this requires making building materials on Mars itself, which is no easy task. At least, that used to be the case, as new research may have found a shockingly easy way to make Martian brick.

Writing in the journal Scientific Reports, researchers at the University of California, San Diego explain that it should be possible to turn Martian soil into brick by doing little more than applying some pressure. Just hitting a sample of the Martian surface with a ten-pound hammer — or at least doing something that would create an equivalent amount of pressure — should make the soil compress into a material stronger than steel-reinforced concrete.

Lead researcher Yu Qiao told Vocativ the research is still in its earliest stages, meaning we don’t yet know precisely what astronauts would need to bring to Mars to produce such bricks in usably large quantities.

“Our candidate research is on the materials level,” he said. “We created coin-sized soil samples to scale up. We still don’t what the final system would look like. One possibility is we need a piling system. We need something to lift the hammer and then release the hammer to hit the soil. That would create sufficient pressure to turn it into a brick.”

Whatever the case, this should be much easier than what researchers previously thought astronauts might need to do. Earlier plans called for explorers to use complex chemistry or even bring a nuclear-powered kiln to the red planet if they wanted to have building material. But Qiao and his team at UCSD worked with a NASA-created simulation of the Martian soil and found its composition makes it well suited for bricks. That’s because Martian soil contains tiny iron oxide compounds that can work to bind a brick together. One type of iron oxide is better known as rust, and it’s the presence of such a compound in the soil that gives the planet its famous reddish color.

While the brick was made on Earth, where the gravity is about five times stronger than that of Mars, Qiao told Vocativ that gravity does not appear to be a major factor, and the process they have discovered should work just as well on the red planet.

It will likely be necessary to test that before human arrive, however, with future Martian rovers or probes. But Qiao and his team have some time, considering the current earliest NASA launch date for a crewed mission to Mars isn’t until 2033.

“If there’s no surprise,” said Qiao, “16 years should be enough for materials development.”