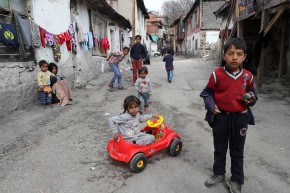 Syria’s Civil War Could Also Be Setting Stage For Epidemics

People are fleeing conflict by going to cities, risking outbreaks of infectious diseases

Syrian children play outside their homes in the Turkish capital Ankara — Getty Images
By Alasdair Wilkins
Apr 27, 2017 at 3:42 PM ET

The Syrian crisis has killed an estimated half million people, and the number forced to flee their homes is more than 11 million. Such massive movement of people — both within Syria and as refugees elsewhere — can have major health implications. As one global health expert warns, these vulnerable, often invisible people may be at high risk of deadly disease outbreaks.

Writing an editorial in Science, Dr. Seth Berkley explains that the Syrian crisis represents a new, unfamiliar reality for those displaced by conflict. A decade ago, 60 percent of displaced people ultimately found themselves in rural areas, mostly in camps. But now few displaced people are in camps, and 60 percent are in cities. These people are largely forced to live in hiding, cut off from government services or global health efforts that might otherwise provide them crucial medical care. As Berkley — the CEO of Gavi, the Vaccine Alliance — points out, that includes inoculations for infectious diseases.

“Rather than escaping cities or seeking refuge in humanitarian camps or shelters, millions are simply taking shelter where they can in the cities, with little or no access to health care,” Berkley writes. “These conditions have fostered outbreaks of polio, measles, meningitis, and drug-resistant tuberculosis.”

What emergency supplies cities do have in case of outbreak would be insufficient to help those that are living in hiding. While conflict like that in Syria is a key driver for the growth of this invisible population, it’s not the only one. “Population increases, combined with land degradation, rising sea levels, poverty, and famine, mean that more and more people will be competing for less land, with one consequence,” Berkley writes. “An increasing number will be drawn or driven into cities.”

This risk isn’t theoretical. Luanda, the capital of the southern African country Angola, experienced a yellow fever outbreak last summer that was the worst in 30 years. And the larger breakdown of infrastructure in war-torn countries like Syria only compounds the problem: Whereas the vaccination rate in Syria was once 80 percent, now it’s down to 41 percent, the fourth worst in the world.

Berkley calls for better, faster methods to diagnose diseases before outbreaks start, as well as vaccines that can be made more quickly in case of a sudden epidemic. But perhaps the most basic takeaway, he writes, is that public health workers — and the world in general — have to recognize the new reality: Those who need help most desperately are no longer in remote villages or refugee camps, but lost amid the teeming chaos of big cities.