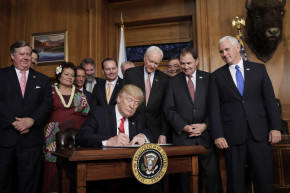 Combatting what President Donald Trump called an “egregious abuse of federal power,” the president signed an executive order on Wednesday calling for a review of national monuments. The order will examine millions of acres of land that have been designated by three preceding presidents, most recently Bears Ears National Monument, which was created by President Barack Obama at the end of 2016.

The Review of Designations Under the Antiquities Act instructs Interior Secretary Ryan Zinke to look over monuments that span more than 100,000 acres and were created within the past 21 years. As part of the act, Zinke can recommend whether to shrink or eliminate certain monuments without consulting the communities possibly impacted by his actions. However, while Zinke has four months to report on other monuments, the order prioritizes possible changes to Bears Ears, with Zinke only having 45 days to recommend possible changes.

During the signing of the order, President Trump, joined by Zinke and Vice President Mike Pence, lamented the more than 265 million acres of land and water Obama placed under federal control through the designation of national monuments.

“Today, we are putting the states back in charge,” the president said. “It’s got worse and worse and worse, and now we’re going to free it up…this should never have happened.”

But others are arguing that Trump’s order is the thing that should have never happened. Environmental and Native American rights organizations have come out in force against the review. After all, the Antiquities Act of 1906 was inspired by the desire to protect Native American ruins.

Cynthia Wilson, the traditional foods program director of Utah Diné Bikéyah, a nonprofit dedicated to supporting indigenous peoples and the environment, called Trump’s order “an attack on Native Americans” and their heritage in Utah.

“This national monument elevates tribal voices to preserve culturally significant sites that we hold deep in our hearts and have a connection to,” Wilson, a member of the Navajo Nation, told Vocativ. “It allows us to reconnect back to our culture and lands, because historically, we’ve just been put on reservations.”

In a statement issued Wednesday afternoon, the Native American Rights Fund (NARF) expressed its disappointment with the Trump administration’s decision. The NARF aired its support for keeping Bears Ears a national monument, noting that the site is a homeland to five tribes — Navajo, Ute Mountain Ute, Uintah and Ouray Ute, Hopi and Zuni — and serves as an important cultural site for others.

“Make no mistake, this order has nothing to do with asking for public input. They got that in creating the Bears Ears Monument. They just don’t like the result,” said Natalie Landreth, an NARF staff attorney. “This order is about taking away public lands form the American people in order to free them up for resource exploitation.”

The view from Comb Ridge is pictured in Utah's Bears Ears area of the Four Corners Region, December 18, 2016.

Wilson called the monument, which encapsulates more than 1.3 million acres of Utah land and which Utah Diné Bikéyah helped design the proposals for, the “most deserving national monument that has been created in the past 21 years.”

“Secretary Zinke recently made a statement that local people should have a voice, so that means he should listen to me and the rest of my community members,” she said.

She added that Utah Sen. Orrin Hatch, who President Trump called “tough” during his Wednesday speech, has ignored multiple invitations to meet with tribal commissions. Hatch posted a video to Twitter last week, saying that Obama ignored local voices when designating Bears Ears and did so “without the support or input” of residents of San Juan County.

“America’s national monuments are incredibly popular, funnel money into our economy and hold precious cultural heritage,” McIntosh said in a statement. “Any attempt to reverse or shrink a monument designation by the executive branch is unlawful under the Antiquities Act. Only Congress has the authority to modify a national monument.”